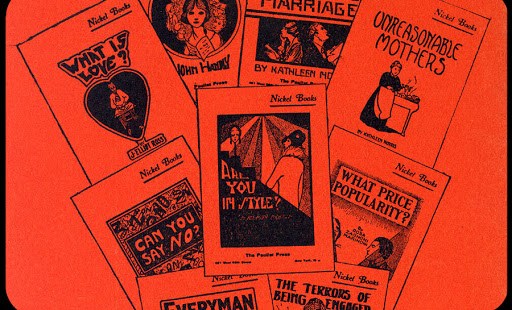 A great way to evangelize in the 21st century.

They were smart. They were well written. And they featured bold cartoon colors on the cover that made the viewer take notice.

They were Catholic pamphlets — little booklets that offered some catechesis about a particular topic: Marriage. The Trinity. Alcoholism. Dating. And during the early to mid 20th century, they served as a powerful means of evangelization. The covers of these pamphlets were the subject of a recent exhibit in Ireland, “Vintage Values.”

It’s time to bring Catholic pamphlets back. The response to such an idea is obvious: Why? The Internet gives us the entire world, indeed the entire universe, at our fingertips. People can find anything they want about the Church in a matter of seconds. Why use print?

The answer is because of the nature of the Internet itself. Studies have shown that when surfing the web, people gravitate towards things they already like. Liberals will go to liberal sites. Movie enthusiasts will go to movie sites. Baseball fans will go to MLB.com. People surf the web to explore hobbies they already like and to reinforce extant political philosophies.

But a pamphlet is different. Not as demanding as a book, yet with more depth than your average blog post, a well-made pamphlet can stick with the reader and get into the consciousness. Imagine the scene: A twenty something women in a big city, say New York or Washington, is walking home from work. She’s handed a pamphlet but a friendly person on the street. The cover is not classical art, but by a contemporary artist, a Christian version of something you might see in The New Yorker. The paper stock and binding would be of high quality. The title is “Genuine Freedom” by George Weigel. Or “Countercultural Chastity” by Dawn Eden. Or an essay on Nazism and evil by Dietrich Von Hildebrand. Or Fr. Robert Barron on Catholic art.

The woman is a little irritated by being approached, perhaps even more so when figuring out it’s one of those religious nuts. But she keeps the pamphlet. Later that night, when the computer is off and the smart phone is recharging, she starts to read it. And what she reads starts to slowly change her life.

This, as much as YouTube videos or tweets, is a great way to evangelize in the 21st century. It also could be done without great expense. A Catholic philanthropist or foundation could pay for an initial print run of say 10,000 pamphlets, and distribute them in one target city. Then, the creators could gauge the efficacy of the pamphlets before reordering.

What we would be doing, in effect, is following the steps of the original Catholic pamphleteers. A good account of their methods is found in the story of Fr. Daniel A. Lord, S.J., a Jesuit and musician who wrote hundreds of the original pamphlets. In his autobiography, Played by Ear, Fr. Lord describes how he got into the business. In 1925 he was asked to write a pamphlet of about Therese of Lisieux, who was about to be canonized.

Fr. Lord accepted, but with one request: “I suggested that, instead of realistic illustrations, we work out a series of symbolic drawings, black and white, with perhaps a suggestion of William Blake of Durer.” This was granted, and several weeks later the pamphlet was published: “It was tiny vest-pocket size, with a slightly embossed cover, a frontispiece, and then alternation of my text and…drawings. I must confess that I liked it a lot.”

So did the public. The pamphlet on the Little Flower was a huge hit, with the publisher, Benziger, claiming to have sold 20,000 in one single day. After that, Fr. Lord notes, the pamphlet bug “had bitten me.” He produced hundreds of them on all kinds of topics — dating, gossip, lying, money, the religious life. They sold in the millions.