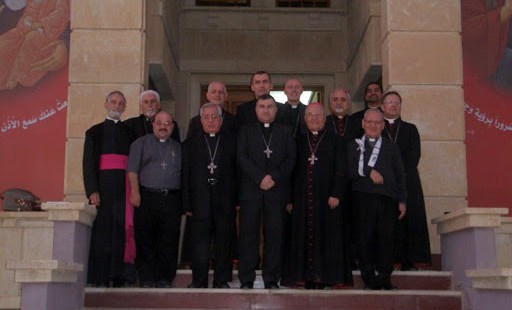 Prelates meet amid fears that ISIS attacks put Christianity at risk of being extinguished from country.

Catholic bishops from Iraq are meeting this week to come up with a “rescue plan” amid growing fears that the ISIS Islamist attacks have put Christianity at increased risk of being extinguished from the country.

The meeting of the Chaldean hierarchy, which starts today, comes after the military success of the Islamic State of Iraq and the Levant (ISIS) prompted yet another wave of displacement within a country which has already seen a dramatic decline in the Christian population over the past decade.

Speaking with Catholic charity Aid to the Church in Need on Monday, Chaldean Auxiliary Bishop Saad Sirop of Baghdad said that up to 75 percent of Christians had left the capital over the past few years.

He said that ISIS attacks elsewhere in the country – and the threat to Baghdad itself – meant yet more Christians were leaving.
The bishop added that in the capital Mass attendance Sunday was “much lower” than normal.

Speaking after arriving in Erbil, in Kurdish northern Iraq, ahead of the start of the meeting, Bishop Sirop said: “What we need is a rescue plan and this is what we will be discussing at our next synod, which we hold every year.”

He added: “Christians and others in Baghdad are leaving because they are afraid of what is going to happen. So many have left Iraq already.

“It is a very difficult moment for the Church in Baghdad.”

The bishop stressed that the decline of Christian presence is not just restricted to Baghdad.

His comments come as recent reports cast increasing doubt on some figures given for the Christian population in Iraq, which some claim to be as high as 300,000—down from 1.4 million at the time of the last census in 1987.

So far this year, Iraq’s Christian community has shrunk again, a trend likely to continue especially after the ISIS attack on Mosul two weeks ago.

The militants’ capture of Mosul prompted the last remaining Christians to flee a city which until 2003 was home to 35,000 Christians.

Chaldean Archbishop Bashar Warda of Erbil is reported as saying that for the first time in 1,600 years there was no Mass in Mosul last Sunday (June 15).

Bishop Sirop thanked Aid to the Church in Need which last week gave nearly 100,000 Euros for displaced people from Mosul in an operation overseen by the city’s Chaldean Archbishop Amel Nona.

The bishop said the crisis could only be solved by reconciliation between the Sunni and Shi‘a Muslims and he repeated calls for the international community to press for negotiation between the various Islamic leaders.

He added that military action would be counter-productive. “Military intervention did not resolve anything in Syria, nor here in Iraq, so we should not think this will work this time.”

Bishop Saad said: “We ask God to give us the wisdom to face these problems with courage. There is no doubt that we are passing through some difficult days.”

For his part, Bishop Nona told Fides News Agency that there is no evidence to support rumors of an "Islamic tax" imposed on Christians in Mosul.

"So far," said Bishop Nona, who has moved to the village of Tilkif, "only certain public Christian employees have been told not to return to their place of work, making explicit reference to their status as members of a minority. Of course, the situation is getting worse, and we are all worried. But I also see that the condition of Christians sometimes becomes the object of propaganda. It is a dangerous exploitation, even for Christians themselves."

In a television interview Sunday, the Iraqi Minister for Human Rights, Mohammed Shia al Sudani, accused Sunni militiamen of ISIL of having committed atrocities among the people of Nineveh Plain, burning churches, imposing taxes on Christian communities and raping Christian women, five of whom, according to the minister, have committed suicide after being subjected to violence.