The Fight Over Labels 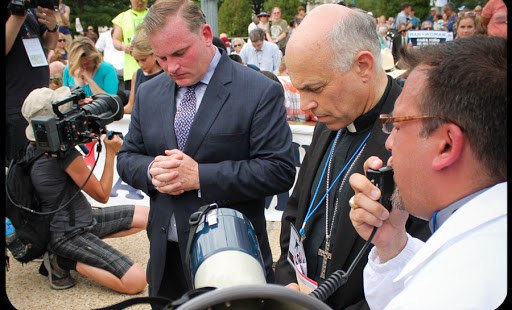 What’s in a name?

The fireworks between U.S. House Minority Leader Nancy Pelosi and her own Archbishop Salvatore Cordileone of San Francisco were the one highlight of last week’s March for Marriage in Washington D.C., which was (unfortunately) a dud in other respects. The public written exchange between the two, in the lead-up to Cordileone’s participation in the March, served as a sharp reminder of a critical truth in pursuing any cause.

If a right cause faces hostility from the media or the public majority, this effort can be exceedingly difficult. In many socially conservative movements, resistance to false and exogenous labeling is seldom stated or directly pointed-out, which amounts to accepting a disadvantage. Across a range of issues, those who seek truth and justice in public life must be unyielding in insisting that their cause be addressed by their preferred designation and must specifically debunk the labels imposed on them by others. At the same time and perhaps counter-intuitively, however, they should follow the Golden Rule and not impose labels on their opponents.

We can see several examples of the importance of labeling in issues today. While Pelosi and her allies described groups that support the March for Marriage as anti-gay, Cordileone assured that he and the March were “not anti-anyone or anti-anything” but rather are “pro-marriage” [italics in original]. The natural reaction is to think in binary terms and that being anti-LGBT is necessarily equivalent to being pro-traditional marriage. Cordileone anticipated this and wrote further that “[t]he latter does not imply the former.” Yet in the climate of the American polity, with ever-increasing division and polarization, it is becoming progressively harder to believe that this is possible.

It is increasingly difficult to argue that what you are opposed to does not necessarily define what you support, and vice versa. Ideological dogmas stripped of nuance, on any side, prevent us from genuinely understanding the deeply held, and often good-willed, convictions of our counterparts. What results then is a duel of labels. In the case of defending the Natural character of marriage, it is a duel that has been all but lost. By being labeled by the bulk of society as anti-equality or anti-gay and not pro-family or pro-marriage or pro-nature, the cause to defend marriage in civil governance has been assigned its fate.

But Christian movements and protests have not universally lost their efforts to maintain a good name. When a Satanic Temple organization planned to perform a Black Mass “reenactment” at Harvard University in May, the local Catholic community decried the event as anti-Catholic. The Satanists insisted that they were not acting with animus toward anybody but instead were pro-rational thought, independent of traditional religious authorities and notions. Most people, even Harvard President Drew Faust, certainly no stalwart ally of traditional Christian positions, did not buy into the latter’s claims and saw the event more as an offense aimed at Catholicism than as a positive promotion of free and rational human thought. Then too, the dominant framing and naming was followed by the corresponding result as the group was pushed off campus.

The area with the most at stake in these types of dynamics is abortion. Pro-life advocates would like the public to see them as such, while labeling their opponents “pro-aborts” or (in the case of the practitioners) “abortionists.” On the other side, pro-choice supporters seek to maintain their brand while designating their counterparts as “anti-choice.” Neither has won a full-fledged victory in the public name game. The mainstream American media commonly calls pro-life people or provisions “anti-abortion” which, while not ideal, is not inaccurate and is much more acceptable than “anti-choice” (and, indeed, some in the pro-life community embrace it).

It is no coincidence then that, unlike the more recent and decisive examples of marriage and the Black Mass, abortion itself continues to be in a stalemate in the court of public opinion. Yes, groups point to polls from year to year that show pro-life or pro-choice trends, according to their agenda, but the truth is that there has not been a dominant swell or trend on either side. The fight for labels and, accordingly, the fight over the sanctity of life remain very much alive.

As that and other such contests continue, however, even Christian advocates with right-hearted convictions ought not force a label upon their opponents. Rather, they should directly demand and justify the name that they prefer for themselves and articulate why the opposite movement’s own name may be inaccurate. This is not only fair, but principled.

How can we in good conscience say that others should be prevented from giving us unwanted labels, such as “anti-gay” or “anti-choice,” while we ourselves place labels such as “pro-abort” upon others? Doing so also tends to close off dialogue and limit the conversion of hearts that we are actually seeking. We must have the faith in our convictions to assert and explain the rightness of the names we take upon ourselves and, in charity, explain the shortcomings of the names that others claim without imposing our own alternatives upon them.

This is true even if the name we would slap on an adversary would be justified — such as in the case of pro-choice advocates, many of whom support policies that are clearly more pro-abortion than pro-choice (e.g. opposing waiting periods, ultrasounds, crisis pregnancy centers, and other resources that would make childbirth more affordable).

By proceeding this way, we demonstrate trust that the truth will reveal itself through the testing of our opponents’ fruits as well as our own. At the same time we need to be more effective in insisting on our identity and publicly testing those fruits. It is a difficult task if waged against the weight of the mainstream media; but if a position be right, this approach may help secure its success in the debates that the future will bring.

Robert Vega works as a staffer on Capitol Hill and serves as a Young Adult ministry coordinator in Washington, D.C.