At-Risk Children at the Border Held in Terrible Conditions 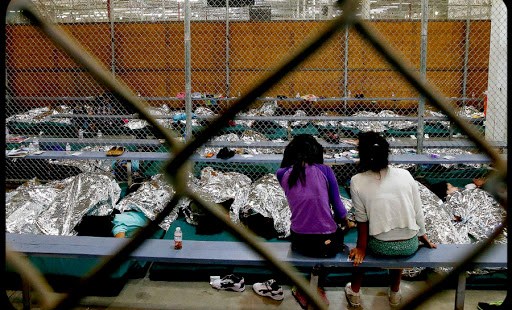 The plight of unaccompanied children from central America who are crossing the  southern borders of the United States  by the thousands in recent  weeks gives a whole new meaning to the term “at-risk kids.”

Yet, major networks and most newspapers have paid scant attention to what these children have endured to get here, and to the substandard conditions of their “warehousing” upon arrival. Where is the outrage? Isn’t this the kind of story that cries out for investigative journalism?

Thanks to a handful of news organizations, details have come to light this past week which ought to shock everyone’s conscience:

When Mexican President Felipe Calderon cracked down on drug traffickers in 2006, some of the major Mexican cartels spread south to central America, taking local gangs under their control, extorting money from mom-and-pop business owners, and recruiting boys under threat of death. Since the 1990s, Honduras (90.4 murders/100,000 people) and El Salvador have had the
highest and second-highest murder rates in the world. These activities gave parents and children a reason to flee north.

Minors who are immigrants have corroborated these facts from personal experience. A 17-year-old Honduran named Carlos was interviewed at a Church-run migrant shelter just south of the U.S. border. He
explained that where he lived “parents were obligated to give a son to the gangs” and gang members “threatened to kill him if he didn’t join.”

Gladys Chinoy, age 14, took a bus to Guatemala’s northern border with “only the clothes on her back.” There she crossed the river into Mexico on a tire-raft. She met up with five women, a dozen children, and a smuggler who were waiting by the  train tracks. A good night for the smuggler, who made  $6,000 to $7,000 for each migrant. They and dozens of teens and mothers with infants scrambled on board a freight train as it slowed, not to a comfortable sleeping car, but to the roof. The majority of those fleeing north that night said poverty and gangviolence drove them from home, and the “change” in U.S. policy—if you cross the border,
you can stay—led them to the U.S. That’s how Gladys’ mother, in the U.S. illegally, understood the policy when she entrusted her daughter to cartel smugglers.

Informal groups of “coyotes” (human smugglers) used to do the lion’s share of smuggling into the U.S., but in the past decade,
cartels developed a “highly-sophisticated human trafficking network.” Would-be immigrants are told to meet a cartel coyote at a designated gathering point. To get there, in buses or atop trains, they “may be
subjected to robbery, beatings and getting thrown off the train by cartel lackeys.” At any stage of their journey, they may be asked to pay additional “crippling fees.” Those unable to pay more, may be forced to carry pot-filled backpacks, or they may be kidnapped to force their families to pay more, or be murdered. A Zetas cartel
leader arrested last year “was charged with ordering the kidnapping and murder of 265 migrants.” Female migrants are always at risk of being raped.

Some children who made it alive to the U.S., and are now among the 1,200 minors being housed at Lackland Air Force Base, had been ordered by smugglers to cut off the ears or fingers of other migrant children to extort more money from their families.

A San Juan, Texas, police sergeant told a reporter for the Wall Street Journal that “stash houses” were proliferating everywhere around his small border town. He has “busted” 21 “stash houses” in just the past nine months. Earlier this month, San Juan police found 43 people trapped inside one suspected “stash house.” The migrants claimed that their captors threatened to electrocute them if they tried to escape, according to a criminal complaint filed in federal court.

More than 400 immigrants were found crammed in “stash houses” during the 17 busts conducted by Texas law enforcement between May 7 and June 4, 2014.

They were lucky to be alive. At a Senate hearing on the humanitarian crisis at the border, Senator Ted Cruz (R-TX)  read from a
letter he received from a Texas rancher:


“In 2012, 129 bodies of deceased illegal aliens were found in our County on private ranch land. Most … within 15 minutes of our front door in any given direction! … In one week last July, I personally rescued 15 people (most were central Americans) that were lost and close to dying from dehydration and heat exhaustion.”


In a letter to  the Department of Homeland Security, the senator pointed out that six of eight “major Mexican drug cartels have command and control networks operating” in Texas. These cartels make $19 to $29 billion annually from drug sales in the United States. They also traffic approximately 10,000 women annually into the U.S. for prostitution.

Put yourselves in the shoes of four to 17 year-old children who have just endured the multiple traumas of this hellish journey—seeing things children should never see, suffering terror, deprivation and abuse—and ask yourself what their greatest needs are. Those needs are certainly not being addressed in Air Force dormitories.

Smuggling kids and moms with infants—even with extortion bonuses—doesn’t pay nearly as well as drug and sex-trafficking. Why then have the drug cartels been taking over the smuggling trade and essentially franchising “coyotes”?

National Border Patrol Council’s president, Brandon Judd, has
claimed that the central American children are being used to create a “smokescreen” to divert border security resources into apprehending, transporting, processing, and caring for these children while cartel members can slip more drugs and criminals into the U.S. In fact, interdictions of drugs in Texas are down 34 percent.

As Sen. Cruz noted in his letter to the Secretary of Homeland Security, “[W]hile we are obligated to keep those children safe, we are also obligated to stop more children from risking their own safety and being forced into such a terrible situation.”

Are we keeping them safe?

Not according to Texas Congressman Louie Gohmert. He faults Health and Human Services for not doing an adequate job of screening and treating communicable diseases brought in by the children. There has been a confirmed case of swine flu at Lackland AFB. Measles, scabies and even leprosy have been diagnosed among the newly arrived. Measles and scabies are highly contagious in close quarters. The congressman offered his
opinion that these conditions evidence "a reckless disregard for human health and life.”

An officer with the local Rio Grande Valley National Border Patrol Council, Albert Spratte,
faulted the inadequate medical screening process and stated that he found the living conditions at the McAllen processing station nauseating. His assessment was confirmed by a Catholic Charities spokeswoman who has been aiding immigrants processed at McAllen. She
described them as being in "poor shape.”

If this dangerous situation of overcrowding and insufficient restrooms and showers in the processing and temporary housing facilities occurred without warning, one could make allowances for the current chaos. Last week, however, the Department of Homeland Security revealed that on January 29th it had posted an
ad on FedBizOpps.Gov, soliciting contractors to provide “unarmed escort staff, including management, supervision, manpower, training … necessary to provide on-demand escort services for non-criminal/non-delinquent unaccompanied alien children ages infant to 17 years of age, seven days a week, 365 days a year. … There will be approximately 65,000 [unaccompanied alien children] in total.”

DHS has since upped its estimate on unaccompanied alien children entering the United States in 2014 to 90,000. Why have we not done more to keep those children safe and to stop more children from risking their own safety? Knowing how inadequate our response has been to date, where is the outrage and where the calls for immediate action?

Susan E. Wills
,
JD, LLM left the practice of law to join the USCCB Secretariat of Pro-Life Activities, where she served for 20 years as Asst. Director for Education and Outreach until her retirement in 2013.
She now serves as Aleteia’s English edition Sprituality Editor.