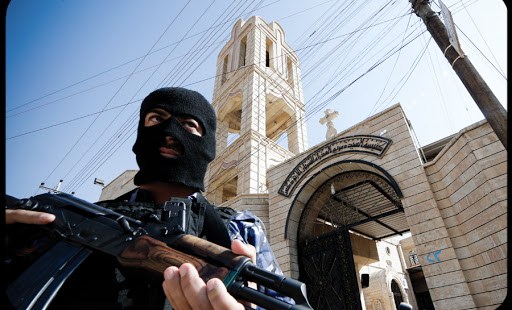 “For the first time in 1,600 years there was no Mass in Mosul last Sunday,” reports Chaldean Archbishop Bashar Warda. An Iraqi city which once was a major center of Christian life is now almost devoid of the sacraments, and its thousands of resident Christians are fleeing Sunni radicals’ reign of religious terror.

If the occupation continues, at some point the last church will close, and the last consecrated host will be consumed — at which point the city will be in one sense devoid of Christ. Think about that for a moment.

Imagine your own city or town, and visualize what it would mean for every church and chapel to close, and the bishop to put the last ciborium in the trunk of his car and drive away. Would the city feel any different to you? Would its shambling life recall a zombie, a body without a soul?

Now think of the cities of Germany after Kristallnacht, where not a single synagogue could be seen whose windows had not been smashed, which had not been gutted by fires of sacred books. Think of those cities in Poland, in Russia, in Greece, where Jews had lived for hundreds or thousands of years — where empty temples and abandoned graveyards now are the only traces left of those cousins of Christ. Walker Percy wrote in The Thanatos Syndrome that the fathomless, seemingly senseless hatred of Nazis for Jews had a real and comprehensible motive: the desire to make mankind a god, and the need to erase every concrete sign of the real God and of His people.

Ours has been a bleak and bloody century, and if we do not learn its lessons, we will reenact all its crimes.

But the hundred years since 1914 have not been uniquely evil. If we look back at the massacres of previous centuries, we might begin to see the explosion of racist violence in the 20th century less as a hideous innovation than as the resurgence of a profoundly human temptation. Our dark impulse to exclude and victimize the Other can only be kept at bay by consciously cultivating a sense of our common humanity.

It may be that what is unusual is not tribalism but its opposite: universalism, the acceptance of a human dignity uniting the whole human family. The effort of empathy is a costly one, and the task of reviving and reasserting the universal rights of man is one that falls to each generation in turn. It is made no easier when the leading sectors of society in the most powerful nations on earth are morally crippled by a subhumanist view of man, which undermines any argument for self-sacrifice and dissolves transcendent moral norms in the acid of relativism.

It may be true that white Westerners feel too guilty or socially constrained to express racial animus; but as Western societies become ever more diverse, that taboo is eroding. Xenophobic parties are growing in strength across Europe, in response to the reckless embrace by European elites of forced multiculturalism and unchecked mass immigration.

Furthermore, the new groups migrating to Western lands are entirely free of white guilt, and bring their own bigotries with them. In the absence of a vital moral discourse that reinforces common humanity and human rights, there is no reason to expect these new residents to be magically immune to the historic human temptation of racial groupthink and violence. The violence that marks racial conflict between native-born African Americans and Mexican immigrants in cities like Los Angeles may offer a window into the broader, pan-Western future. What is more, it is clear that the lessons the West learned from the racist excesses of the twentieth century were woefully incomplete, amounting to little more than:

1. It is wrong for white people to discriminate against others.
2. It is wrong for European nations to conquer and colonize non-European nations.
3. Because Hitler used ethnic identity as a pretext for murdering people, Western nations must abandon any ethnic or historical basis for their identities — even nations that were conquered and terrorized by Hitler, such as Poland and Ukraine.
4. None of these lessons apply to non-Western nations or nonwhite people living in them.

Generals always blunder by planning for and refighting the last war. In the battle against racism, our culture certainly seems preoccupied with preventing such unlikely occurrences as the rise of National Socialism in Germany, while ignoring or excusing the real and lively threats to human dignity that are arising across the world, even in Europe. Watchdogs who track anti-Semitism in Europe focus much of their attention on tiny, contemptible fringe groups of nationalistic thugs instead of the groups that actually perpetrate most of the anti-Jewish violence across Europe — radicalized Muslims.

Indeed, if we use a more realistic definition of nationalism, we will find that Islamist movements today ought to be included in it. They constitute a grave and growing threat to the safety and liberty of hundreds of millions of people — including both non-Muslims and those Muslims who reject the revival of sharia. Religious and ethnic identities often blend and fuse, particularly in the minds of persecutors. So it makes perfect sense to include the worldwide epidemic of religious persecution, most of it perpetrated by radical Muslims, under the heading of racism and nationalism. For these Muslims, there is only one nation: the House of Islam. Everything outside it is the House of War, which they are called to convert, or to conquer and control. Non-Muslims in such societies must either convert or accept a kind of Jim Crow status as inferior, humbled, third-class citizens (dhimmis) who are forbidden to take part in politics and expected to give way to Muslims in every sphere of life.

This is the goal pursued by Islamists who target Christians in a long list of countries from Nigeria and Sudan to Pakistan, and treasured by radical Muslims who dream of breeding and bombing their way to power in England and France. Ancient Christian communities have already been ethnically cleansed from Iraq in the wake of the U.S. invasion, and Christians (among other religious minorities) fear that a similar fate faces them in Syria, should the al Qaeda-linked rebels in that country overcome its brutal, but religiously neutral, Ba’athist regime. Christians in Egypt face mounting violence as they are made the scapegoats of Islamist frustration in the wake of the military’s crackdown on the Muslim Brotherhood.

We must admit to ourselves the ugly fact that Islamism is an ideology and that its hoped-for Caliphate is a virtual nation (like the Greater Germany Hitler dreamed of). Radical, nationalistic, anti-Semitic, and anti-Christian radicals number in the millions and seek to control whole countries through groups like the Muslim Brotherhood, which was only dislodged from Egypt in 2013 through a brutal military coup. Such groups’ explicit agendas are both expansionist and totalitarian — openly calling for conquest, and for the domination of every sphere of life by their rigid ideology. Such groups are leading what journalist John Allen has called The Global War on Christians, although Hindus, Jews, Alawites, secular Muslims, and other would-be victims also number on their list. In certain ways and for certain groups, it really is 1933 all over again.

Jason Jones and John Zmirak are co-authors of the forthcoming The Race to Save Our Century: How Modern Man Embraced Subhumanism and the Great Campaign to Build a Culture of Life, from which this article has been adapted.