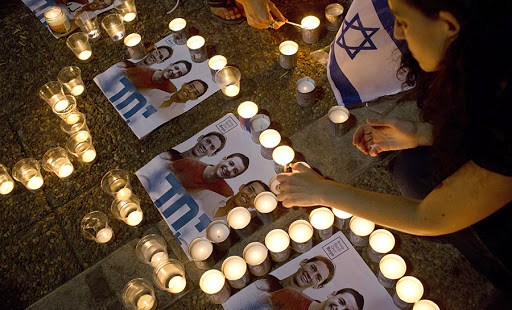 © AFP PHOTO/OREN ZIV
ISRAEL, Tel Aviv : Israelis mourns and light candles in Rabin Square in Tel Aviv on June 30, 2014 after the announce that the bodies of the three missing Israeli teenagers were found. Israel confirmed finding the bodies of three teenagers who disappeared in the southern West Bank on June 12, blaming the Islamist Hamas movement for their kidnapping and murder. AFP PHOTO/OREN ZIV ++ISRAEL OUT+++
Share
Print
Catholic News Service - published on 07/02/14

Latin Patriarch of Jerusalem warns against escalation of vengeance.

Rabbi Riccardo Di Segni said the Pope phoned him at home late in the afternoon July 1 and said: "Good evening. This is Pope Francis. I wanted to personally express my sadness for the death of the three youths."

The rabbi told Rome’s Il Messaggero newspaper he was surprised since the Vatican press office had already published a strong statement condemning the murders of the boys who were kidnapped in mid-June and conveying the Pope’s condolences.

During their phone conversation, he said, the Pope asked if there was anything he could do.

"It was an informal conversation, very human. He’s an extraordinary man," the rabbi said.

Rabbi Di Segni also told Il Messaggero that he had been working with Vatican officials to arrange a meeting at the Vatican between Pope Francis and the families of the three kidnapped boys as part of the effort to generate international pressure for their release.

Pope Francis told the rabbi his willingness to meet the families and embrace the boys’ grieving mothers had not changed.

Meanwhile, Latin Patriarch Fouad Twal of Jerusalem condemned political and religious leaders who, he said, were fanning the desire for revenge. The discovery of the three young Israelis’ bodies led to a large demonstration in Jerusalem July 1.

A 17-year-old Palestinian male was found murdered July 2 in a forested area on the outskirts of Jerusalem. His family had reported him missing earlier in the day, and many people suspected his death was a revenge killing.

"The assassination of innocent people is always an execrable and unacceptable crime and a serious obstacle on the path toward the peace for which we must tirelessly continue to strive and pray," Father Lombardi said.

"Pope Francis participates in the unspeakable suffering of the families struck by this homicidal violence and the pain of all persons afflicted by the consequences of hatred," Father Lombardi said, and he "prays that God might inspire all with thoughts of compassion and peace."

After the boys’ bodies were found, Israeli military launched what it described as "precision strikes" on 34 sites in the Gaza Strip. The Israeli Defense Forces said the strikes were in response to 18 rockets fired from the Gaza Strip into Israel June 29-30.

The three teens were kidnapped as they were hitchhiking home from their school in Gush Etzion, a cluster of Israeli settlements in the West Bank, near Bethlehem. Israeli officials accused Hamas, which recently formed a coalition government with Palestinian President Mahmoud Abbas, of being responsible for the abduction.

Abbas condemned the kidnapping, and Palestinian security forces were coordinating with the Israelis to find the kidnappers.

Auxiliary Bishop William Shomali, chancellor of the Latin Patriarchate of Jerusalem, had asked anyone with information about the kidnapping of the three teens to come forward and help return the youths to their families. At the same time, June 25, he called on the Israeli army to keep its reaction and its search methods proportionate.

"Kidnapping three Israeli young people is not fair, and is against human rights and human dignity. We are opposed to this; this is not the right way to make peace," he told Catholic News Service. "(But) the reaction of the Israeli army is disproportionate to what happened."

At that point, he said, Israeli army forces had arrested some 600 Palestinians in their search for the youth; others estimated 400 were arrested.ose body was found this morning by Israeli police in a forest west of the city of Jerusalem.

In Jerusalem, the Vicar for Hebrew-speaking Catholics of the Latin Patriarchate of Jerusalem, also expressed his condolences to the families of the three Israeli teens.

"We are close to their families and friends," said Jesuit Father David Neuhaus. "Let us pray that the Lord will help them to live, to move forward, and comfort them in this great pain."

Father Neuhaus said there is a growing fear of the reaction to the murders.

"We live in a cycle of violence that has lasted for decades and we fear the price that the Palestinian people will perhaps pay," he said. "We hope and pray that the leaders of the State of Israel respond with wisdom and vision of the future."