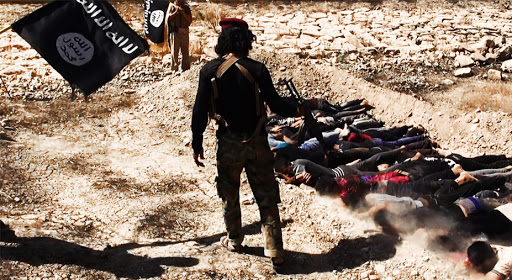 © WELAYAT SALAHUDDIN / AFP
IRAQ, SALAHEDDIN : An image uploaded on June 14, 2014 on the jihadist website Welayat Salahuddin allegedly shows militants of the Islamic State of Iraq and the Levant (ISIL) executing dozens of captured Iraqi security forces members at an unknown location in the Salaheddin province. A major offensive spearheaded by ISIL but also involving supporters of executed dictator Saddam Hussein has overrun all of one province and chunks of three others since it was launched on June 9. AFP PHOTO / HO / WELAYAT SALAHUDDIN

=== RESTRICTED TO EDITORIAL USE - MANDATORY CREDIT "AFP PHOTO / HO / WELAYAT SALAHUDDIN" - NO MARKETING NO ADVERTISING CAMPAIGNS - DISTRIBUTED AS A SERVICE TO CLIENTS FROM ALTERNATIVE SOURCES, AFP IS NOT RESPONSIBLE FOR ANY DIGITAL ALTERATIONS TO THE PICTURE'S EDITORIAL CONTENT, DATE AND LOCATION WHICH CANNOT BE INDEPENDENTLY VERIFIED ===
Share
Print
Agenzia Fides | Jul 03, 2014

Christians continue to be under fire. Ninevah Plain conditions dismal.

With air force bombs falling on Mosul, Islamists looting churches and residents fleeing, the city and its environes are in turmoil

"A few days ago the Iraqi air force began bombing in Mosul, and the air raids are increasing each day in intensity," local Chaldean Archbishop Amel Shamon Nona told Fides. "Yesterday the roads that cross the Nineveh Plain were full of convoys of cars with Muslim families fleeing from Mosul to Erbil and Iraqi Kurdistan."

In the early days after the June 9 takeover of Mosul by the Islamic State of Iraq and Syria, Muslim groups had prevented looting in Christian churches. But in the past couple of days, "armed groups raided the Syriac Orthodox Church of St. Ephrem and the Syrian Catholic Church dedicated to St. Paul," said Archbishop Nona. "The raid lasted about ten minutes, and the cross at the altar has been removed from the Syrian Orthodox Church."

In the cities and villages in the Nineveh Plain outside Mosul, there is no electricity, and water supplies are starting to create humanitarian emergencies among the population, partly due to the hot weather that is affecting the region. Practically the whole area of the Plain is under Kurdish military control.

But there is some speculation that the Kurdish Peshmerga militia, who are not coordinating with Iraqi government troops, may have entered into an unwritten pact of non-aggression with the Sunni insurgents. A possible break-up of Iraq would encourage the movement for independence which the Kurds have long hoped for.

ISIS announced this week that it has unilaterally established a caliphate in the areas under its control. It declared the group’s leader, Abu Bakr al-Baghdadi, the head of its new self-styled state governed by Shariah law and demanded that all Muslims pledge allegiance to him.

In his weekly address, Iraqi Prime Minister Nouri al-Maliki said the move poses a threat to the entire region, describing the militant group’s announcement as "a message to all the states in the region that you are inside the red circle now," the Associated Press reported.

"No one in Iraq or any neighboring country will be safe from these plans," al-Maliki said.

With the support of other Sunni militants, the extremist group has overrun huge swaths of northern and western Iraq in recent weeks, including the country’s second-largest city, Mosul. The blitz across Iraq appears to have crested, at least for now, as it reaches Shiite-majority areas, where resistance is tougher, and as it seeks to consolidate its control of the territory already in hand.

In what appeared to be a bid to peel away some of the extremist group’s allies among Iraq’s Sunni tribes, al-Maliki offered an amnesty "for all tribes and people who got involved in any act against the state."

"They should return to their senses. We are not excluding anybody, even those who committed misdeeds, apart from those who killed or shed blood," he said. "I welcome them to return and stand with the other tribes that have taken up arms."

Al-Maliki offered a similar amnesty after militants seized two cities in central Iraq early this year, but few if any Sunnis took up his offer.

With its recent gains, ISIS now controls a swath of land that stretches from northern Syria to the outskirts of Baghdad in central Iraq. That has sent tremors across the region, particularly in the capitals of Iraq’s neighbors — Saudi Arabia, Jordan and Iran.

The United States, which withdrew the last of its troops from Iraq in 2011, is also keeping close tabs on events.

President Barack Obama has been hesitant to send much military aid to Iraq for fear of dragging the U.S. into another years-long Mideast war. The White House has ruled out sending in combat troops, but this week sent more soldiers to Baghdad to help bolster the U.S. Embassy. All told, officials say, there are about 750 U.S. troops in Iraq — about half of which are advising Iraqi counterterrorism forces.

U.S. manned and unmanned aircraft are also flying dozens of reconnaissance missions a day over Iraq to gather intelligence.

The Sunni offensive is fueled, at least in part, by the religious minority’s long list of grievances with al-Maliki and his Shiite-led government. They accuse al-Maliki, who himself is Shiite, of treating them like second-class citizens and unfairly targeting them with the security forces.