Why Pope Francis Is Not a Communist 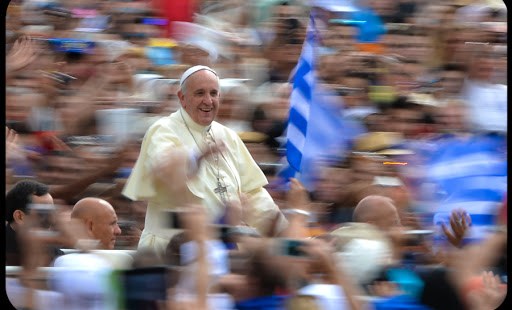 The latest papal interview raises a question that’s been gnawing at some Catholics.

The world was roiled again by something Pope Francis said in an interview published Sunday by Il Messaggero, a Roman newspaper.

First, the Holy Father was asked whether the Gospels speak more to the poor or the rich.

"Poverty is at the heart of the Gospel,” the Pope replied. “You cannot understand the Gospel without understanding poverty, taking into account that there is also a great poverty of spirit: to be poor before God because God fills you up. The Gospel is addressed equally to the poor and to the rich. It speaks of a poverty that accompanies wealth. Do not condemn the rich at all, but rather riches when they become idols. The god of money, the golden calf.”

But then the interviewer asked Pope Francis how he would respond to a recent column in The Economist that claimed he takes an “ultra-radical” line and speaks like Vladimir Lenin.

"I say only that the Communists have stolen the flag,” Francis responded. “The flag of the poor is Christian. Poverty is at the heart of the Gospel. The poor are at the heart of the Gospel. Take Matthew 25, the protocol over which we shall be judged: ‘I was hungry, I was thirsty, I was in prison, I was sick, naked.’ Or look at the Beatitudes, another flag. The communists say that this is communist. Yeah, right, 20 centuries later.”

The Holy Father concluded with a joke: “So you could say when you speak to them: ‘But you are Christians.’”

Some precincts of the American hard right went predictably bonkers. “NUTS,” was Jim Hoft’s headline at Gateway Pundit. Rush Limbaugh wondered if the pope was claiming Jesus as a communist. The comboxes at Free Republic, the Washington Times, Newsmax and The American Catholic swelled with insults aimed at the Holy Father. There will be more where this came from, but the week is young.

So, is there a sense in which communism borrowed from Christianity? I would say there is, and particularly in two ways, both of which have historically played an important part in attracting people to communism.

The first, as the Holy Father noted, is a concern about justice, especially justice for the poor. The Servant of God Dorothy Day, who had been a communist in her early years, wrote, “I have said …  that the mass of bourgeois smug Christians who denied Christ in His poor made me turn to Communism.” The conservative hero Whittaker Chambers, in his magnificent book Witness, similarly wrote “educated men become Communists chiefly for moral reasons.”

Communism, like all secular and atheistic philosophies, grows out of a cultural context that supplies a hidden moral structure that even its originators may not perceive. Karl Marx was raised in Trier, in the Prussian Rhineland, a largely Catholic area of Germany. He came from a long line of rabbis, including his maternal and paternal grandfathers, yet his parents baptized him in the Lutheran Church at the age of six. Though Marx later rejected God completely, the moral scaffolding of his early life is evident in his empathy for the working class struggle in a rapidly industrializing Europe. Marx even understood the role of religion in helping people cope with the sadness of the world. “Religious suffering,” Marx wrote, “is, at one and the same time, the expression of real suffering and a protest against real suffering. Religion is the sigh of the oppressed creature, the heart of a heartless world, and the soul of soulless conditions.”

Suffering. Oppression. Soullessness. These are terms freighted with an acute sense of justice, which in turn implies a moral order to the universe. All the pseudo-scientism of Marx’s philosophy, which he dubbed “dialectical materialism,” couldn’t hide that appeal to a higher moral order, which was a direct product of the Christian milieu in which Marx lived and of which he was an heir. It is for this reason that the historian Arnold Toynbee called communism a “Christian heresy,” a judgment with which the great Thomist Jacques Maritain agreed. When Pope Francis rhetorically says to communists, “But you are Christians,” this is what he means.