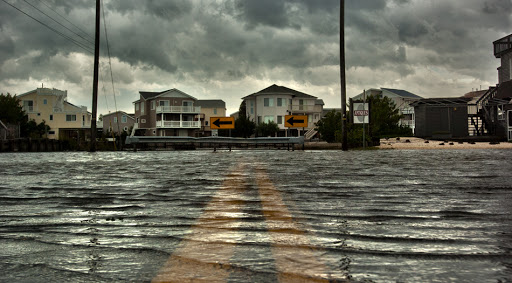 Chicken Little parenting about the teenage years is futile.

As I write this, Hurricane Arthur is rolling in to the south of me. His spinning, threadlike arms waving like a mutated spider. He brings before him some pretty hefty thunderstorms, and they are directly above my house right now, growling and flashing in the space above my head.

Also growling and flashing in the space above my head are my four boys, who were ostensibly put to bed 20 minutes ago, but whether through some barometric effect or a result of too much Coke at dinner, are bouncing and yelling and stomping: a human version of a thunderstorm.

My husband, who has “Grounds Manager” as one of many titles at his work, keeps getting alerts on his business phone. “SEVERE THUNDERSTORM!” they screech. “HEAVY WINDS!” “POSSIBLE HAIL!” “RAIN!” He rolls his eyes a little at each one. “Really,” he says only half to me, “what is the difference between a thunderstorm and a severe thunderstorm?” I shrug. I’m not the amateur meteorologist around here. That’s him. “There is none,” he answers. “All thunderstorms have wind and possible hail and rain. It’s ridiculous.”

My youngest son, four years old and painfully adorable, tumbles down the stairs. “Bad news, Mama,” he says, looking very serious. Above our heads, I hear the sounds of jumping boys and thunder mingling. “The storm clouds are out! The thunderheads!” I smile at him, assure him that all will be well, and shoo him off to his father for a re-tucking into bed.

Someday, I think to myself, someday these boys won’t be so small. Someday—and considering that my oldest son is already nine that day isn’t so far off—they will be teenagers, and the sounds of their silliness and laughter will be replaced by surly grunts and angry words.

The thought is accompanied by such sorrow that it jerks me back into myself. I examine it carefully, demanding to know where this unquestioned notion that adolescence will bring anger and disrespect came from.

The source is obvious—popular culture, friends’ complaints, and my own perception of my teenage years. In a prideful attempt to control the narrative of my life, I’m always the first to tell on myself before anyone else can. I know I was a terrible teenager, and caused my parents much sorrow.

But do these things combine to foretell with absolute certainty that my children will walk the same path? Is it possible that, like thunderstorms, all adolescents share some common traits, but not all swirl into some supercell of disastrous proportions, destroying all in their wake? Is the fate of my children a foregone conclusion, and is it the conclusion of the most dramatic, tumultuous path? Are all these warnings about how horrible the teenage years going to be accurate enough to rob the present of its joy?

While writing this, the power went off. Happily, I’d hit “save” a few moments before, so my voice wasn’t added to the cacophony of outrage that filled the house. “What the heck do you all care if the power’s out?” I chided them, “y’all are supposed to be sleeping!” By the time I was done lighting candles, the power was back on, all but a few words of this article had been recovered, and six children, including four previously hyperactive boys, were sleeping.

I close this out with the thunderstorm fading off into the south, having been, after all, just a regular thunderstorm. Despite all the jarring warnings to the contrary, we weathered it with relative ease. So my prayers tonight echo the storm: that the adolescent years of my children be met with the same level-headedness that we met tonight’s weather: no hysterics, no breathless anticipation for the catastrophic, just a clearheaded assessment of events, and a knowledge that we’ll all come through on the other side.

Cari Donaldsonis the author of Pope Awesome and Other Stories: How I Found God, Had Kids, and Lived to Tell the Tale. She married her high school sweetheart, had six children with him, and now spends her days homeschooling, writing, and figuring out how to stay one step ahead of her child army. She blogs about faith and family life at clan-donaldson.com.