Why the Hysteria Over Hobby Lobby? 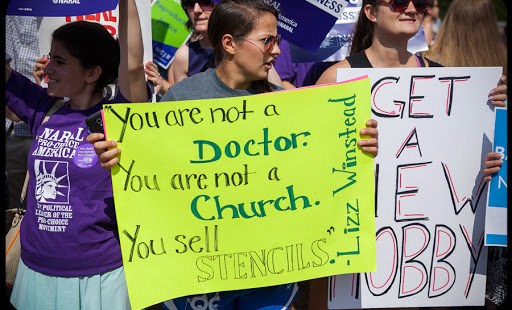 Some food for thought for feminists.

On a superficial level, it’s hard to take seriously anything the “reproductive-rights” crowd says about wars on women, contraceptive access or abortion. The rhetoric on these subjects has become so hysterical and mendacious that we spend most of our time simply trying to clear up misconceptions. There’s been a flurry of that this week, after the Supreme Court decreed that the family-owned craft store, Hobby Lobby, should not be required to provide abortifacients to their employees through their health coverage plans. (No, Hobby Lobby doesn’t exclude contraceptives from their plan altogether. No, they don’t force their female employees to share their religious views. No, covert right-wing operatives are not coming to snatch women’s 28-day packs out of their grasping fingers.)

Far-left secularists can be a little surly in the throes of cultural victory. As Ross Douthat astutely explains, it’s disappointing for them to find that their political triumphs in Congress have been squashed by the Supreme Court. Still, there are explicable reasons why the contraceptive topic brings out craziness. They are convinced that contraceptives and abortion are a necessity if women are to occupy the place in society equal to men.

There’s a brutal logic to it. In the modern world, respect and status go hand in hand with earning power and professional success. If women are bearing children through their promotional years, this will impose enormous responsibilities on them, making it exceedingly difficult for them to stand equal to men in a competitive workforce. The only solution is to relieve them of the burdens associated with maternity. Leveling the playing field requires us to relieve women of their reproductive handicap.

There are quite a number of problems with this scheme. First of all, a society must have children if it is to continue. Some people even want them. When societies encourage women to delay or forego childbearing for the sake of careers, families get smaller and less numerous, and eventually workforces start to thin as populations age. Some Western countries have now contracepted their way into serious demographic decline.

For women themselves, the situation is complicated, and most of the obvious solutions turn out to be excessively simple. On the one hand, it isn’t reasonable simply to inform women that they must find their joy must in hearth and home, and forego the benefits of professional accomplishment. There are goods to be gained through rarified specialization, and one thing the modern world has made clear is that women, like men, can find satisfaction in these opportunities. Women can also have talents that are genuinely valuable to employers and to society. On an economic front we have something to gain from capturing these.

It isn’t enough, therefore, to decree by fiat that women need not pursue professions, and that motherhood is their “full time job”. In a society that values rarified excellence and professional specialization, women will feel some attraction to that, which is not evil in itself.

At the same time, it could not be more evident at this point that there are consequences, not merely, but especially, for women themselves. However aggressively they apply their modern tools of contraception, abortion and artificial fertility treatments, modern physicians still cannot give their patients everything that they want fertility-wise. Modern women still become pregnant when they do not wish to be, and fail to become pregnant even when a child is their most fervent desire. Abortion has emotional consequences that women do not expect, and more aggressive fertility measures (such as IVF) all come with side effects and risks and, of course, a very steep price tag. Even apart from the moral concerns, there are very serious reasons to be dubious about these practices.