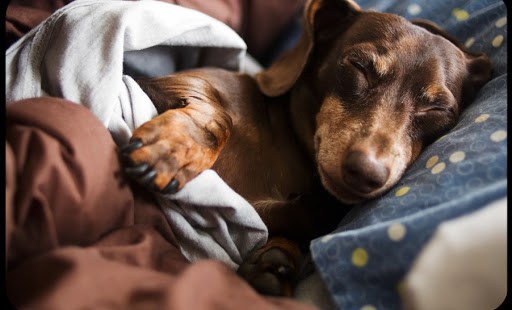 What we can learn from a grossly morbidly obese dachshund.

“Our enemy is not somebody far off in a distant land. Our enemy is somebody close by who threatens us, who blocks us.”
—
Jean Vanier

When I hear “Love thine enemy,” I tend to think of Hitler, or bin Laden, or the most recent person who has failed to recognize my literary and spiritual genius. Lately, though, I’ve been seeing that our real enemy is the person we judge or are annoyed by. The person incapable of seeing and doing things “our way.” The person who is never going to “get better”—and—and thus, whom we disdain and dismiss.

In the midst of my reflections, I received an email that was so to the point, and so profound, that I wanted, with permission, to share it in its entirety.

“I am a veterinary student and have spent a good portion of my life breeding and managing livestock. Animal husbandry is my first real language and the one I speak most fluently. Which in way is a kind of practical theology. You are working with a group of creatures that do not understand you, and thus you must be patient. You must be kind. You must try to put yourself in their shoes. You can try to force them, harass them, goad them…. They will resent you, fear you, and maintain a distance that may forever sever your ability to have a relationship of trust. Sometimes you must goad them, and out of love do something that can look barbaric, but in retrospect is actually the thing which saves their lives. But you try not to blame them for their ignorance, for their lack of understanding—and at that moment you are at a place of divine clarity. You, in your wisdom, must become a dog, a cow, a horse, a pig, a lamb. You must become Christ to them. You, with the intention of becoming the good shepherd, must first become the sheep, the lost lamb.

"As a veterinarian, you are constantly exposed to the disordered, to the broken, to the wounded, to the hurting—not to mention just the gross mismanagement of a pet by irresponsible ownership. So today, on my facebook news feed—I saw a video of a grossly morbidly obese dachshund. My first thought was a recoil of disgust. How pathetic. How could someone let a dog get this way, rapid fire evaluation that fixates on all the factors that cause this dog to be in such a state? But as you watch this video closer, you see his current caretakers are there. They are encouraging him to walk.

"It would be easier for the dog to lay there, and I don’t think anyone would really blame him if he did. But his caretakers want him to walk. They are looking at this morbidly, disgustingly obese dog and are saying—’Come on buddy! You can do it!’ They have set up ramps where the stairs are so he doesn’t have to face an obstacle he would have undoubtedly been destroyed by. And they cheer him along. His steps are not graceful.They are plodding and short—the critic would be quick to point out he will more than likely never run again in his entire life, his joints are probably shot, and his basic conformation is wholly inadequate to mesh with his current state.

"But do you know what? The dog doesn’t care about that. Because he feels alive, he knows someone is taking the time to walk with him, to build him up. He looks up at his owners with the adoration that can only come from the wholly loving, wholly trusting eyes of a dog with a look of earnestness … and do you know what? His tail is wagging. He is happy because he knows that these apparently futile steps, this attempt to haul his pathetic lard ass, brings joy to his master and thus brings joy to him. He could look more closely at his past, at his apparently disordered affinity for food, at the failure of a guardian to step in—to make the tough-love decisions to curb him back when so much of this pain and strain on his feeble joints could have been avoided.

"Maybe he would rather attack the dumpsters and gorge on refuse than be forced to sit with the pain of unmet desire. But instead—
he does something truly incredible. He leaves the self-blame at the door, and takes another plodding step—
keeps his eye on the master, and wags his tail. It nearly brought tears to my eyes. May we all be like him.”


May we all be like that with each other.