The World Cup As Seen From the Vatican 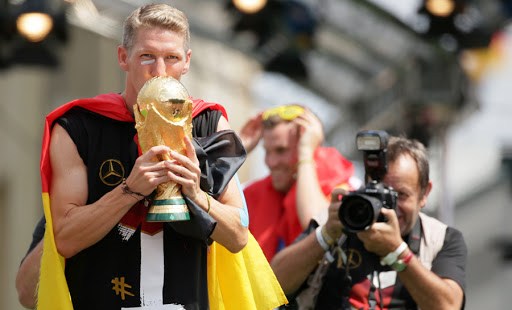 More than a billion people tuned in to watch the World Cup finale Sunday, seeing Germany beat Argentina in the Maracana stadium in Rio de Janeiro.

The teams’ nationalities led to the game being labeled "Finale of the Two Popes," as Pope Francis is Argentinean and Pope Emeritus Benedict XVI is German, specifically, Bavarian.

Neither of them watched the game, however, according to Benedict’s longtime secretary Archbishop  Georg Gänswein, who now serves as Prefect of the Papal Household.

Regarding the coincidence and the role that soccer can have for dialogue and the encounter of different nations and cultures, Vatican Radio’s Alexander Gisotti on Monday interviewed Archbishop Gänswein, who hails from the Black Forest section of Germany.

Archbishop Gänswein: I rooted for the team of the heart—that is, Germany—and I watched it at home with the Memores Domini [the religious who manage the papal household]. They too were rooting for Germany, and at the end we were very happy, even though I feel sorry for the Argentines. They played well, but I think in the end Germany deserved its victory.

Alexander Gisotti: Many, of course, were wondering: Did Pope Benedict watch the game? Does he know about the outcome? Can you tell us something about it?

Archbishop Gänswein: I invited him to watch the game, but he thanked me and said he preferred to go to sleep. Of course, this morning I informed him—but he had also already seen my face, which bore a clear message. Then I informed him on how the game went and on the result.

Gisotti: Evidently, there was also some joy on his part…

Archbishop Gänswein: Yes and no, because in the team there are also some Bavarians, and this does warm the heart even more.

On the other hand, he said: "We hope that the Argentines will make their comeback soon." And then, one to zero is a result that does not humiliate…

Gisotti: Of course … "Argentina"—one’s thoughts go to Pope Francis. Were you  able to speak to the Holy Father about this game? Can you also tell us something about this?

Archbishop Gänswein: Not yet. I sent my heartfelt "condolences" to his secretary, Don Fabian, and he answered me in a very dry, clear, but convincing way, and he sent me congratulations for our team’s victory.

Gisotti: We have seen, especially on social media, Pope Francis and the retired Pope Benedict have been united with a certain wave of affection for both; in some way, if I may say so, soccer has united them even in the collective imagination.

Archbishop Gänswein: I saw it too and I must say that I was very glad, because you see that soccer has the power to unite. And then we have seen many things that have been expressed in a joking way, sometimes in an ironic way, in the end always so nice, sincere… And I think that this occasion has made it clear that there is a good agreement between the two Popes.

Gisotti: Pope Francis tweeted, even before writing a message, that the World Cups—and sports in general—are an opportunity to encounter others.

Archbishop Gänswein: Pope Francis frequently speaks—and it has become a key word—of “encounter,” and sports—soccer above all—is an ad hoc opportunity to encounter one another in a sporting and sincere manner. The encounter, as such, is what counts. And of course, there is always the result, but what counts is the encounter. And if the match is positive for both teams, I think it has a great power, not only for these 22 people, but for many other people, and not only the two countries represented, but for people from all around the world.

Gisotti: Of course, the finale of the World Cup unfortunately coincided with the conflict between Israel and Palestine. Among other things, the Pontifical Council for Culture has launched the initiative "Pause for Peace," linked to the World Cup.