How John Paul the Great Won the Cold War 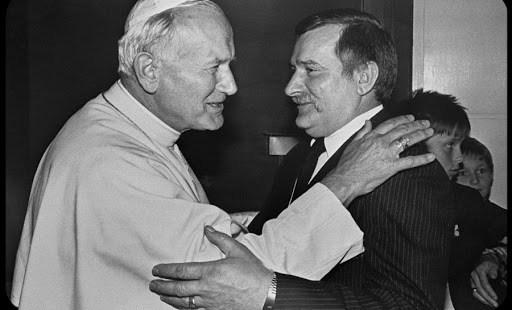 Vatican policy of the 1970s can claim no credit.

As the world marked the silver anniversary of the Polish elections of June 1989, which eventually brought to power the first non-communist Polish prime minister since the Second World War, a conference met at the Vatican to consider “The Church in the Moment of Change in 1980-1989 in East Central Europe.” (The habit of devising succinct, punchy titles is not overly-developed in Rome.)

There were moving testimonies, by former Solidarity leader Lech Wałęsa and from Ukrainians who are living a similar drama today. And then there was an address by the former cardinal secretary of state (and current dean of the College of Cardinals), Angelo Sodano.

The burden of Cardinal Sodano’s remarks was that John Paul II’s achievements in central and eastern Europe in the 1980s had been “prepared” by the Vatican’s Ostpolitik in the 1970s, as conducted by Pope Paul VI, his chief diplomatic agent, Archbishop Agostino Casaroli, and Casaroli’s principal deputy, Msgr. Achille Silvestrini (both of whom became cardinals). Cardinal Sodano laid particular emphasis on Paul VI’s 1977 meeting with Polish communist party leader Edward Gierek and the Casaroli/Silvestrini conversations with Polish politburo member Stefan Olszowski. All of this, Sodano concluded, was like John the Baptist preparing the way for the Lord.

Outside certain Italian circles, it would be difficult to find a knowledgeable historian who believes that any of that analysis is sustainable.

The Ostpolitik of Paul VI (who worried that he was not conducting a “policy of glory”) was based on the premise that the Cold War division of Europe would be a feature of the international landscape for decades, if not centuries; that the Church had to “save what could be saved” while making whatever deals it could with communist governments; and that Catholic criticism of the human rights violations of communist regimes should be muted. The results of this strategy included the effective destruction of the Church in Hungary, whose leadership became a subsidiary of the Hungarian communist party; the thorough penetration of the Vatican by Warsaw Pact intelligence agencies (to the benefit of communist negotiators); and the undercutting of Catholic leaders in Poland and in what was then Czechoslovakia.

John Paul II’s approach to east central Europe was based on different premises: that the post-war division of Europe was immoral and historically artificial; that communist violations of basic human rights had to be named for what they were; and that the “captive nations” could eventually find tools of resistance that communism could not match, if they reclaimed the religious, moral, and cultural truth about themselves and lived those truths without fear. John Paul shrewdly let the Casaroli/Silvestrini diplomacy continue. But behind that clever façade — “See, nothing has changed!” — the Polish pope led a morally-driven campaign of resistance to communism that was vindicated in the Revolution of 1989: a complex historical event, to be sure, but one for which the Vatican Ostpolitik of the 1970s can credibly claim no credit.

The refusal of Italian curial diplomats like Cardinal Sodano to recognize the truth of the Ostpolitik’s sad effects on the security and integrity of the Holy See itself is especially unfortunate. The deep penetration of the Vatican by Soviet-bloc intelligence agencies has been documented in numerous scholarly studies, many of which are cited in the second volume of my John Paul II biography, The End and the Beginning. When intelligent men like Cardinal Sodano — who is not alone among his countrymen in defending the Ostpolitk — fail to reckon with the ample documentary evidence of what was in fact going on in the 1970s, between the Vatican and communist governments in east central Europe, one has to assume that something other than concern for the historical record is afoot.

What is going on, I suggest, is an untoward national hubris married to the defense of an outdated model of the Church’s role in world affairs: a model that worked reasonably well at the 1814-15 Congress of Vienna but that came close to causing disaster in the 1970s.