Twelve Hours of Prayer for Peace in the Holy Land 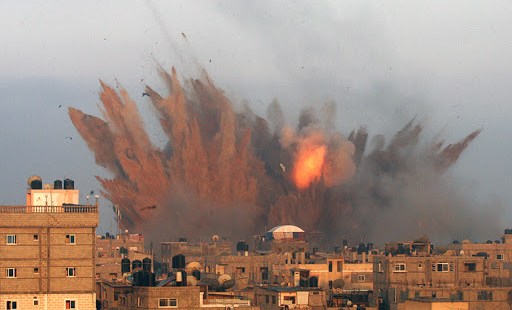 A ball of fire is seen following an Israeli air strike, on July 11, 2014 in Rafah, in the southern of Gaza Strip. Israeli warplanes kept up deadly raids on Gaza but failed to stop Palestinian militants firing rockets across the border, as the United States offered to help negotiate a truce. AFP PHOTO / SAID KHATIB
Share
Print
Agenzia Fides - published on 07/16/14

Young people will gather tomorrow in the Basilica of St. Anastasia al Palatino in Rome for 12 hours of continuous prayer for peace in the Holy Land. And they will be joined spiritually by a number of youth groups in Italy and abroad, including in Jerusalem.

The prayer vigil will begin at 6pm, with a Eucharistic celebration presided by the rector of the basilica, Father Alberto Pacini, and will continue until 6 the next morning.

On Sunday, Pope Francis addressed "a heartfelt appeal to continue to pray for peace in the Holy Land, in the light of the tragic events of recent days."

The escalation of hostilities followed the June 12 abduction and killing of three Israeli teenagers, for which Israel blamed Hamas. Israeli authorities said a July 2 kidnapping and killing of a 16-year-old Palestinian was a revenge attack carried out by Jewish extremists. Catholic leaders in the Holy Land had urged Israelis and Palestinians to resist revenge attacks, warning it would lead to an escalation.

The Palestinian death toll passed 200 on Wednesday morning as thousands of residents streamed out of northern and eastern Gaza neighborhoods for a second time while Israel stepped up its offensive against Hamas, the Wall Street Journal reported today. The United Nations Relief Works Agency said around 3,000 Palestinians had flooded into makeshift shelters overnight.