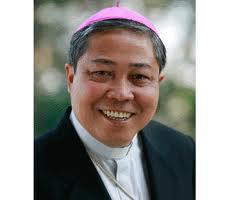 Archbishop Auza has been nuncio to Haiti, succeeds Archbishop Chullikat.

The Vatican today officially announced that Pope Francis has appointed the Holy See’s nuncio to Haiti, Archbishop Bernardito Cleopas Auza, as Permanent Representative to the United Nations in New York. The appointment had first been announced in early June by the Apostolic Nunciature in Haiti and reported by Vatican Radio.

Archbishop Auza succeeds Archbishop Francis Chullikatt, who was appointed by Pope Benedict XVI in 2010. There has been no announcement about Archbishop Chullikatt’s new assignment.

Archbishop Auza is a native of the Philippines, and was appointed Apostolic Nuncio to Haiti in 2008, when he became a bishop. He was nuncio to Haiti when the country was devastated by an earthquake in January 2010. The archbishop of Port-au-Prince, Joseph S. Miot, was killed in the magnitude 7 quake.

Boston Cardinal Sean O’Malley visited Haiti in 2010 on behalf of the U.S. Bishops Conference to assess the needs of the Church there. He spoke highly of Archbishop Auza.

“I was so impressed by his ability to deal with the situation,” the cardinal wrote on his blog. “He had been stationed at the Holy See’s delegation to the United Nations in New York as well as Geneva, so he has an understanding of these international organizations, and he speaks perfect English,which is helpful in dealing with U.S. organizations, especially the military. I think he is a great support to the bishops of Haiti.”

The nunciature, where Archbishop Auza lived, was destroyed in the event, and the nuncio told Catholic News Agency at the time that he and the personnel are sleeping in the garden.

Born in 1959 in Talibon, Philippines, Archbishop Auza was ordained in 1985. Among other assignments, he worked at the Holy See Mission to the United Nations in New York from 2006 to 2008.

Archbishop Chullikatt is a native of India, where he was ordained a priest in 1978. He served as apostolic nuncio to Iraq and Jordan from 2006 until his appointment to New York in 2010. He has also served in Honduras, various countries in southern Africa and the Philippines. He also worked at the Secretariat of State in the Vatican.