Why Anglicans Made Women Bishops 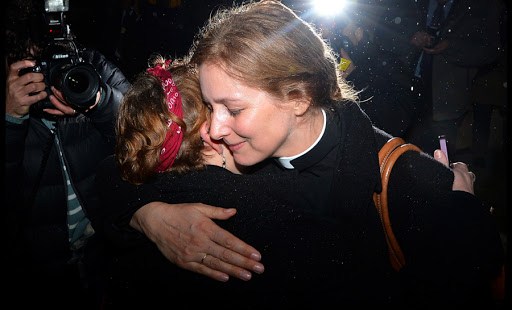 The role of popular demand.

“Allowing women to take up the role of bishop is going to change the church,” was the crisp conclusion of the current Dean of Salisbury Cathedral, The Very Revd. June Osborne after the vote which finally paved the way for women to be consecrated to the Episcopate of the Church of England. The Dean went on to add that “I think its going to change our society as well because its one more step in accepting that women are really and truly equal in spiritual authority as well as in leadership in society.”

The result of the votes in each of the three houses, which together comprise the church’s Synod, had to amount to a two-thirds majority or more for the proposal to pass. This majority has proved hard to obtain on the several previous occasions when the matter was considered, with the laity being the last House to grant the needed level of support.

The widespread indignation then, which was much reported in a largely hostile media after the last vote in 2012, together with the negative comments of a great many public figures, from the Prime Minister down, was a significant factor in the relative haste with which the measure was brought back to the Synod this time around. (Under the normal rules of procedure such an important matter would not be permitted for further debate until after a new Synod had been elected which could have delayed things for up to 6 years).

The vote is clearly one of deep historical importance, changing as it does an all-male line of succession since the time of the Apostles. In that long historical context it is fascinating that it has only come 20 years after approval was given for women to be ordained to the priesthood. Given that admission to major Holy Orders in any of the three forms of Deacon, Priest, and Bishop marked the acceptance of this as a theological possibility, such delay may seem strange. On the other hand, an enduring sense of the bishops as successors to the Apostles has lent this step a certain feeling of added magnitude.

Moreover, the considerable depth of resistance from those opposed, reflected mostly theological concerns upon which matters of social change had no bearing and this made the opponents hard to overcome. This was made yet more difficult by the unwillingness of those favoring the change to offer “cast iron” guarantees that provision would be made to allow the opponents to sustain themselves indefinitely into the future. This again marked a policy change from the time when women were first ordained as, at that point, such structural provision was made in the form of “flying bishops” for congregations which opted for this. However, it seems that the side in favor of innovation drew from the subsequent experience—that such congregations far from withering and fading away actually continued with renewed vigor over time—the lesson that no such provision should be provided again.

So with such deeply entrenched but opposing positions what changed? The fact that it was not felt possible to leave this matter to the usual slow procedural processes and that it was also seen as especially urgent by the new Archbishop of Canterbury Justin Welby, since the time of his installation, reflects some important factors unique to the position of the Church of England in the life of the nation. These have to do with the complicated ways in which the Church of England relates to wider society and culture which is why the expectations of the wider society outside its doors seems to have weighed so heavily in the end.