As Investigation Ramps Up, Prayers Offered for Victims of Malaysian Airline Crash 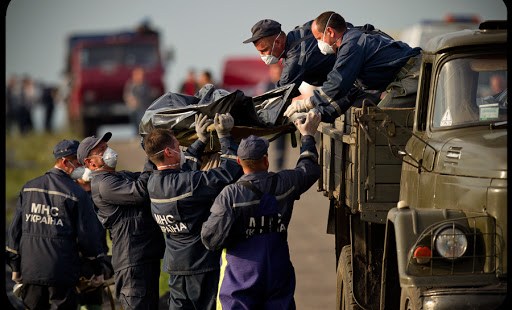 A diocese prays that those responsible may gain a “profound understanding for the evil of their actions.”

Following Thursday’s crash of Malaysia Airlines Flight MH17, religious and civil leaders from around the world are offering up prayers, and searching for answers about the tragedy.

“Our entire Church prays for the eternal repose of the souls of the innocently killed,” Major Archbishop Sviatoslav Shevchuk of the Ukrainian Archeparchy of Kyiv-Halyc said in a July 18 statement.

Flight 17 from Amsterdam to Kuala Lumpur was carrying 283 passengers and 15 crew Thursday when it was shot down in eastern Ukraine close to the Russian border, an area that has seen months of clashes between government troops and pro-Russia separatists. The victims came from 13 nations, including 192 Dutch citizens and 80 children.

The head of the Ukrainian Catholic Church stated that the “tragedy has revealed that evil… is a real threat to peace and security of the whole world,” and prayed for peace and consolation both for “Ukraine and for the entire world.”

“We remain united in our prayers with the families of the deceased and with all those suffering due to this tragedy,” he stressed.

Also among the dead was Sister Philomene Tiernan, an Australian member of the Religious Sisters of the Sacred Heart and a teacher at Kincoppal-Rose Bay Catholic School in Sydney. The Sydney Morning Heraldsaid she was returning home after attending a conference in Britain, a theology course in Ireland and a retreat in Burgundy, France. A statement issued by the Kincoppal-Rose Bay School of the Sacred Heart, where she had been associated with their community for over 30 years, mourned her loss.

“We are devastated by the loss of such a wonderfully kind, wise and compassionate woman, who was greatly loved by us all. Phil contributed greatly to our community and she touched the lives of all of us in a very positive and meaningful way," said Principal Hilary Johnston-Croke.

"Her entire existence was to bring good into this world," wrote Lucy Thackray, a former student of the nun’s in a Daily Mail tribute. "But she gave unwavering guidance and taught people that faith in God, in themselves, and in the world would carry you through the journey."

An estimated 100 victims of the plane crash were HIV/AIDS delegates, including prominent AIDS researcher Joep Lange, on their way to a conference in Melbourne.

Lange had worked in the field of infectious diseases since the early years of the AIDS epidemic and had focused his efforts on making treatments cheaper in poor nations in Asia and Africa. “Joep was a person who knew no barriers,” said Dr. M.M. Levi in a statementon behalf of the Amsterdam Institute for Global Health and Development, where Dr. Lange worked.

Ukrainian president Petro Poroshenko called the crash an act of “terrorism” and pledged that those responsible for the attack “will be held responsible.”

The Ukrainian government also released a statement saying that the plane was shot down by Soviet-era “Russian air defense systems” used by pro-Russian separatists. Ukrainian intelligence also intercepted a phone call allegedly between a separatist leader and a Russian security officer, though the veracity of the call has not yet been verified.

Russian president Vladimir Putin offered his “condolences to the bereaved families” and the home countries of the victims of what he called a “terrible tragedy,” but blamed Ukraine for the event, saying the country “over whose territory it happened is responsible.”

He said “renewed hostilities in the southeast of Ukraine” were responsible for the event. Putin stated that the Russian government would support investigations into the crash.

At an emergency meeting of the U.N. Security Council, the U.S. pointed blame at the separatists, saying Washington believes the jetliner likely was downed by an SA-11 missile and "we cannot rule out technical assistance from Russian personnel," the Associated Press reported.