The Real Situation of Christian Suffering in Nigeria 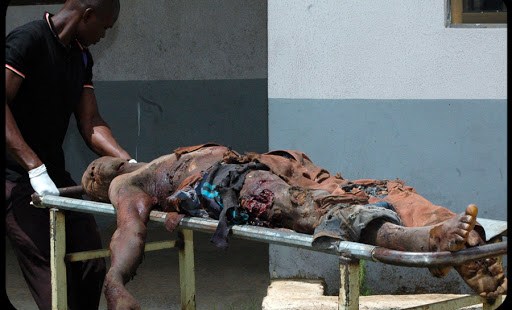 AFP Stringer
The body of a victim of a bombing at the Sharon Church in Kaduna is taken on June 17, 2012 to the morgue of the Saint-Gerard hospital in the northern Nigerian city. Bomb blasts damaged five churches in four cities in Nigeria's northern Kaduna state on June 17, injuring dozens of worshippers and leading to an immediate curfew, officials said.  The number of casualties in the blasts in the neighboring cities of Zaria and Kaduna and in the southern Christian-dominated Nassarawa and Barnawa was not immediately clear. Police and the military cordoned off the areas. Kaduna state authorities immediately imposed a 24-hour curfew. AFP PHOTO / STRINGER
Share
Print
Aleteia - published on 07/21/14

Cardinal John Olorunfemi Onaiyekan tells his side of the story.

The situation in Nigeria is dire. Extremist militant group Boko Haram have still not returned the two hundred girls they abducted two months ago. The National Assembly of Nigeria has split up for two months, which means the military must wait before receiving approval for a loan of $1bn to combat the group.

Boko Haram’s violent insurgency has grown ever more brutal since its formation in 2009, with the aim of creating a purely Islamic State. Various Christian churches have been attacked and many people have been either kidnapped or murdered. President Goodluck Johnathan has received criticism for not dealing adequately with the faction. Aleteia speaks to cardinal John Olorunfemi Onaiyekan, from Abuja, Nigeria, about his understanding of the actual situation of Christian suffering in Nigeria.


What is the actual situation of Christian suffering in Nigeria?

The information that goes out from the international media is true but it does not tell the full story; the BBC, Aljazeera, CNN, they always talk about the bad things, the bombs, the killings, the burnings. They never have time to talk about the efforts that Nigerians are making to live together, to isolate the troublemakers, and to build a peaceful nation.

On the social level, you wouldn’t know the difference between Christians and Muslims: we all dress similar, we go to the same markets, the same offices and government houses, we have the same armed forces and police.

So when you hear people say the Muslims are killing Christians, we in Nigeria say ‘Please, no, don’t talk like that.’

We want to make it clear that we are very embarrassed by the activities of this small group of very dangerous and wicked fanatics, who are also a problem for Muslims.

I always tell my people in Nigeria: ‘don’t think terrorism is only against Christians. The Taliban in Pakistan are against Muslims in Pakistan, the people that al Qaeda in Iraq or Afghanistan are fighting and killing are Muslims as well.

So we in Nigeria ought to understand this, and let us who are Christians and Muslims join hands to deal with this group. The things this group – Boko Haram – have done are very strange to us. We would never have believed that five years ago we would have such a group in Nigeria.


Is there a place allowed for Christianity in Nigerian society and government?

Unfortunately what happens is, Muslims are more likely to stand up for Islam and reject anything that is against Islam. And unfortunately Christians, firstly, often don’t stand up for Christianity, and secondly, they are prepared to allow many things that are not in favour of Christianity and they tell us we should separate ourselves from politics.

But I say, stop telling the Muslims that they should stop mixing religion with politics; you are wasting your time, because they will continue to do so. Rather ask yourself, what type of politics am I promoting? For me, does my religion mean as much for me in my politics as Islam means for their politics. For as long as my Christian faith does not impact on my Christian politics, and the Muslim considers his own religion as the only important one, you will end up with a problem.