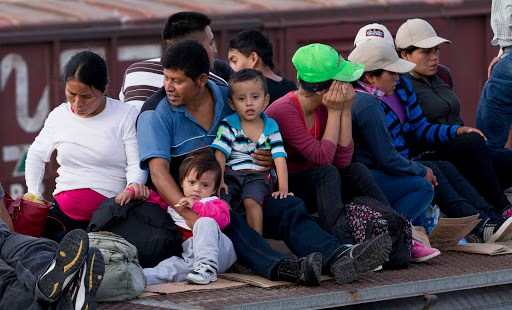 Church responds to humanitarian crises “because we are pro-life,” says bishop, responding to critics.

Volunteers help provide clean clothes and hot food for immigrant mothers and their young children in a temporary Catholic Charities shelter in McAllen, Texas, a border city located along the Rio Grande.

Meanwhile, Catholic immigrant activists in California and Arizona have visited federal detention facilities to check on the welfare of thousands of minors who migrated alone to the United States from Central America.

On the East Coast, Catholic Charities attorneys in Boston and Washington educate young migrants, most of whom crossed the U.S.-Mexico border without documents, on what they can expect while their cases are pending in the federal immigration court system.

In recent months, the Catholic community across the country has stepped up to provide direct humanitarian assistance to the tens of thousands of unaccompanied minors who have fled their homes in Central America’s war-torn Northern Triangle countries of Guatemala, El Salvador and Honduras. They are helping those immigrants despite the fact they crossed the border illegally–and in spite of the resulting political backlash.

"There have been questions as to why Catholics are involved. The Catholic Church responds to humanitarian crises here at home and all across the world because we are pro-life," Bishop David A. Zubik of Pittsburgh said in a July 19 prepared statement.

"Whether they are traveling because of poverty, or violence, or with the hope of reuniting with relatives on the other side of the border, followers of Jesus are called to protect these children and help them because they are very vulnerable and defenseless against any abuse or misfortune," Bishop Zubik said.

Since October 2013, more than 57,000 child migrants have been caught at the border. The government expects 90,000 minors to cross the border this year and another 140,000 in 2015. A U.S. Conference of Catholic Bishops report attributes cartel and gang violence to be the "overriding factor" to explain the mass youth migration, with other "push factors" that include a lack of economic opportunities and the desire to reunify with adult relatives already living in the United States.

However, the sudden spike in illegal border crossings is also aggravating what was already a politically sensitive issue. In several locations across the country, people have protested attempts to open local temporary shelters for the unaccompanied minors. In Murrieta, Calif., a crowd of protesters in early July turned back buses carrying hundreds of migrant women and children that were headed for a federal processing center.

Sister Mary Ann Walsh, the director of media relations for the USCCB, contrasted what she called "the mob in Murrieta" with volunteers in Texas’ Rio Grande Valley who are assisting mothers and young migrant children at parish-based welcome centers in McAllen and Brownsville.

"The youngest guest: a one-day-old baby girl," Sister Walsh wrote. "The baby and others are being helped by a host of volunteers."

Earlier this month, the Diocese of San Bernardino in California opened a temporary shelter in a former convent that took in 46 migrants; 32 of them were children.

"It was a temporary transition center where they could come in, have some water, have some rest, get a change of clothing. The kids could relax and play a little bit," John Andrews, the San Bernardino diocesan spokesman, told Aleteia. Jones said volunteers also helped the migrants contact relatives in the United States, and then arranged for them to find transportation to stay with those family members.