The Mainline’s Love Affair With Hamas 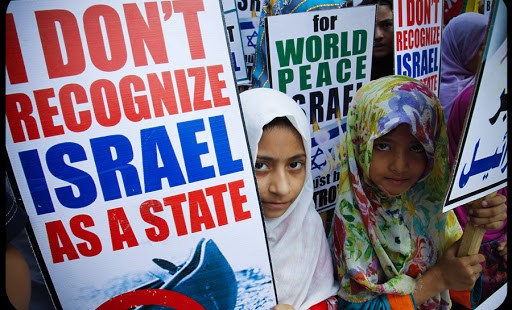 Theories of peacemaking are apparently more important than reality.

Surprise! There’s a silly letter to President Obama about the current Gaza conflict from oldline Protestant and liberal Catholic groups essentially siding with Hamas and against Israel.

As U.S. churches and Christian organizations, we join others worldwide who are calling for an immediate end to the violence — as well as its underlying causes — in Palestine and Israel. As the situation continues to deteriorate, and horrendous death and destruction mount in Gaza, we are called by conscience to say, “Enough.”


What do these church groups identify as the "underlying causes?" Might it be that Hamas officially rejects Israel’s existence and fights for its eradication? No! The underlying cause is Israeli injustice towards Palestinians.

Sadly, the scenes that we are witnessing are all too familiar. Over the last decade, Israel has repeatedly carried out similar military operations in Gaza. In each instance, over a period of days or weeks, Israel bombed and invaded Gaza, and Palestinian militant groups stepped up their practice of firing rockets into Israel. Each of these operations ended with a cease-fire that temporarily decreased military action but did not end the conflict nor lift the oppressive Israeli blockade institutionalized in Gaza since 2007.


Note there is no direct criticism here from the church groups of Hamas "firing rockets into Israel." Just critique of the "oppressive Israeli blockade."

It is our view that these cease fires failed to last because they did not address deeper injustices. After each new cease fire Palestinians in Gaza remained subject to the legal, structural, and physical violence inherent in Israel’s occupation and siege on Gaza, which constitutes collective punishment. This includes crushing restrictions and limitations placed on Palestinian movement, access to water and electricity, economic development, and other freedoms in both the West Bank and Gaza.


Again, no criticism here from the church groups of Hamas, which is dedicated to perpetual violent struggle and seeks to erect an Islamist state over all Palestinian Territories and over Israel. The church groups are just interested in "deeper injustices" by Israel.

The Obama administration and Congress have rightly condemned the indiscriminate rockets from Hamas and other Palestinian militant groups into Israel. It is time for the U.S. to condemn the Israeli bombardment of civilian centers and the blockade just as strongly. This latest escalation cannot be divorced from the broader context of the Gaza siege and occupation.


Oh, how nice, here finally the church groups do seemingly disapprove of Hamas’ "indiscriminate" rocket attacks. But Israel’s defense against the rockets is just as bad, they assert, if not worse.

To achieve a lasting peace, the Israeli occupation of Palestinian land, including the siege of Gaza, must end. The U.S. must, therefore, make ending the occupation and lifting the Gaza siege priorities for our foreign policy in the region.

Violence and military force will never bring peace for Israelis and Palestinians. Military aid to Israel amounting to more than $3 billion per year creates a heavy moral obligation for the U.S. to ensure that this aid is not used in violation of U.S. law and fundamental human rights. A key step in this direction would be for the United States to investigate the use of U.S.-supplied weapons and military equipment during this conflict and to ensure full accountability under existing U.S. law if human rights abuses have been committed using this equipment.