When Will We Act if Not Now to Save Christians in the Middle East? 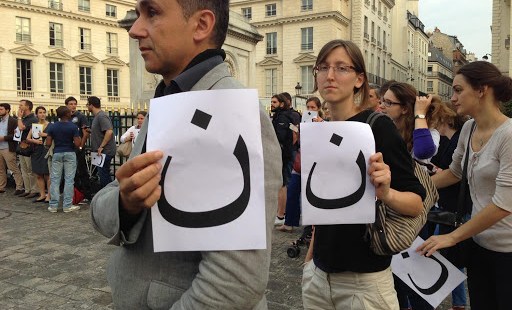 In Defense of Christians is trying to raise awareness and relief aid to persecuted Christians.

While recent events in Iraq have raised awareness of the plight of Middle Eastern Christians, this persecution is far from new and more widespread than many realize. As Christians around the world post the sign of the “nun” (the first letter of Nasara, an Arabic term for Christian) on their Facebook profiles and pray for peace, Middle Eastern Christians themselves are taking action. With their brothers and sisters enduring varying levels of discrimination and persecution, including death, “diaspora Christians” are coming together to advocate for policy change on a unified national level.

Journalist John Allen reports that 100,000 Christians have been killed worldwide in each year of the last decade. “That works out to eleven Christians killed every hour, every day, throughout the past decade,” he explains in his recent book The Global War on Christians. Targeted violence against Christians has been going on for quite some time, and yet it has received little attention in the media or in political policy.

While many Middle Eastern Christians now living in the United States have aided their relatives, or worked as a community or denomination to raise awareness, little has been done on a national level to encourage America’s policy makers to take overdue action.

Andrew Doran, Executive Director of the non-profit group In Defense of Christians (IDC), notes that second- and third-generation Middle Eastern Americans also have the opportunity to make a real difference for their family and friends who remain in the region. Raising awareness that could lead to a change in American foreign policy regarding Middle Eastern Christians is the goal of a Summit that will be convened by the IDC in Washington, D.C. this September.

The Summit will gather together Middle Eastern Christians of various faith traditions from around the United States, raise awareness of Christians’ dire situation in the Middle East, and equip participants to meet with members of the U.S. House and Senate.

Protection of religious freedom is IDC’s top priority. When the United States lends aid to nations in the Middle East, it is rare that this aid is conditioned on the assurance that religious liberty will be protected.

Yet, across the board, Doran says that Middle Eastern Christians are sending the message “Better late than never.”

Doran hopes that, with unity among Christians, will come a heightened awareness among Middle Eastern immigrants and among U.S. citizens in general: “American people must stand in solidarity with these Christians and demand that the U.S. government’s policies be consistent with the values of its people. This means the preservation of the Christian communities of the region.”

The line-up of speakers at the Summit demonstrates the growing unity among Middle Eastern Christians on this issue. Speakers include the Maronite Patriarch of Antioch, the Patriarch of the Syriac Orthodox Church, and the Catholics of the Holy See of Cilicia of the Armenian Apostolic Church, as well as Roman Catholic leaders.