Pope in Caserta Asks Pardon for Persecution of Pentecostals 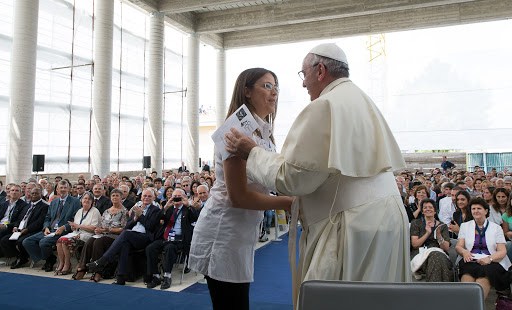 AFP PHOTO / OSSERVATORE ROMANO
ITALY, Caserta : This handout picture released by the Osservatore Romano shows Pope Francis greeting an unidentified woman during the Pope's visit to the Evangelical Church of Reconciliation in Caserta, on July 28, 2014. Pope Francis is in Caserta for a private visit to meet with the pastor. AFP PHOTO / OSSERVATORE ROMANO
Share
Print
Aleteia - published on 07/28/14

Pope Francis returned to the southern Italian city of Caserta on Monday for a private visit to the Pentecostal community known as the Evangelical Church of Reconciliation. According to Catholic News Service, the Pope referred to the complicity of some Catholics in the fascist-era persecution of Italian Pentecostals and evangelicals.

"Among those who persecuted and denounced the Pentecostals, almost as if they were crazies who would ruin the race, there were some Catholics. As the pastor of the Catholics, I ask forgiveness for those Catholic brothers and sisters who did not understand and were tempted by the devil," Italian news agencies quoted the pope as saying.

The Pope first met the founder of the community, Pastor Giovanni Traettino, during his time as archbishop of Buenos Aires and over the past year he has met and received groups of Pentecostals at his Santa Marta residence here in the Vatican.

After greeting the pastor and his family, Pope Francis was welcomed by over 200 Evangelicals who had travelled to Caserta from around Italy, as well as from the U.S. and South America.

Calling the Pope "my beloved brother,"  Traettino said the Evangelical community was deeply grateful for the visit, which would have been unthinkable until very recently, said Vatican Radio. Many Evangelicals, he said, pray daily for the Pope and see his election as the work of the Holy Spirit.

Pardon and reconciliation were the themes at the heart of the Pope’s words as, to loud applause he asked forgiveness for the words and actions of Catholics who have persecuted Pentecostals in the past.

All of us are sinners, the Pope stressed, but all of us must continue to walk boldly in the presence of Our Lord. Quoting from St. Paul’s letter to the Corinthians, Pope Francis spoke of the diversity of the Body of Christ. But he stressed that diversity is reconciled to unity through the action of the Holy Spirit.

Following the encounter, Pope Francis then had lunch with members of the Pentecostal community in Caserta and was due to return by helicopter to the Vatican later this afternoon.

The Vatican had described the visit as "strictly private" and, except for Vatican media, reporters were kept on the roof of a nearby apartment building. In the new worship space of the Pentecostal Church of Reconciliation, still under construction, Pope Francis met with about 200 people, including members of Traettino’s congregation, other Italian evangelicals and representatives of Pentecostal ministries in Argentina and the United States, the Vatican said.

Msgr. Juan Usma Gomez, who handles the Catholic Church’s official relations with evangelicals and Pentecostals, told Vatican Radio July 22 that Pope Francis teaches that "to work for Christian unity you need brotherhood," which is why he continues to nurture the friendships he established in Argentina. The iPhone video message the pope made in January with another Pentecostal friend, Bishop Tony Palmer, who died in a motorcycle accident July 20, "opened a door because it reached a really significant number of people," Msgr. Usma said. "It’s an adventure that Pope Francis is asking us to establish. … He’s way ahead of us and we’re trying to follow this pattern."