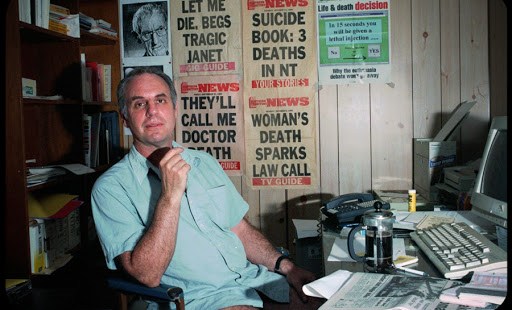 Philip Nitschke, the infamous advocate of “rational suicide,” is officially named a risk to public health and safety.

Dr. Death—as Philip Nitschke has long been known—was recently downgraded to Mr. Death, thanks to the nationwide emergency suspension of his medical license by the Australian Medical Board’s South Australian affiliate. The panel found that he “posed a ‘serious risk’ to the health and safety of the public.”

His status may become permanent, pending the outcome of three separate inquiries into his practice specialty: promoting and aiding people in committing “rational suicide.”

In 1997, Nitschke abandoned full-time medical practice to found Exit International (formerly the Voluntary Euthanasia Research Foundation), through which he conducts his suicide and euthanasia promotional activities, consisting of:

●  how-to lectures
●  a euthanasia handbook
●  personal counseling of “patients” (he’s even made house calls to ensure success)
●  selling cylinders of nitrogen with instructions on how to use it for suicide and euthanasia, and
●  advising individuals and the public on how to obtain and use Nembutal (pentobarbital) also known as “death in a bottle,” a barbiturate now used mainly to euthanize animals.

An interesting fact about Nembutal is that its Dutch manufacturer forbids its sale to prisons for use in lethal injections to carry out the death penalty. Too cruel for convicted murderers, but all right for “rational” suicide in Nitschke’s calculus. Exit International’s tips for obtaining Nembutal are quite specific, as ABC News reported:

“Exit International’s Web site says the best places to obtain pentobarbital are ‘20-odd [United States-Mexico] border crossings, from Tijuana in California through to Matamoros on the Gulf of Mexico.’

“The group provides information packets for these death tourists, with colorful photos of the packaging to help identify the drug among all the animal products for sale in these over-the-counter veterinary stores.”

Having been involved in the deaths of many hundreds of people in Australia, North America and the U.K., the question is: What’s taken so long for these countries or their medical groups to try to curb the activities of Dr. Death that go beyond his free speech rights?

These countries have never subscribed to the notion that facilitating so-called rational suicide is in the best interests of individuals or society. Professionals humanely intervene whenever possible to help treat those who are suicidal due to clinical depression or other psychiatric disorders. Drugs, therapy, and counseling are offered so that patients can overcome the impulsive desire to die, can recognize their self-worth and have hope for their future.

We already have enough suicides in the United States. In 2010, U.S. suicide deaths (38,364) actually exceeded traffic fatalities (33,687). There’s little comfort in knowing that 32 of 80 reporting countries have suicide rates even worse than the United States.

So, kudos to the Australian Medical Board for taking decisive action.

What prompted the Aussies to act against Nitschke now?

The “bridge too far” was the prominent suicide death of 45-year-old Nigel Brayley, a Perth native suspected in the murder (by “falling off” a cliff) of his wife, as well as the murder of a former girlfriend. As the police were closing in on his arrest and indictment, with Mr. Brayley facing perhaps 20 years in prison, he attended one of Dr. Death’s workshops, chatted with Nitschke about his situation and later exchanged emails with him. Brayley obtained Nembutal illegally from China and killed himself before he could be arrested. Nitschke admitted in an Australian Broadcasting Company TV interview that he did nothing to stop Brayley’s suicide and defended it as a “rational suicide” because, after all, Brayley preferred not to languish in jail for these murders.