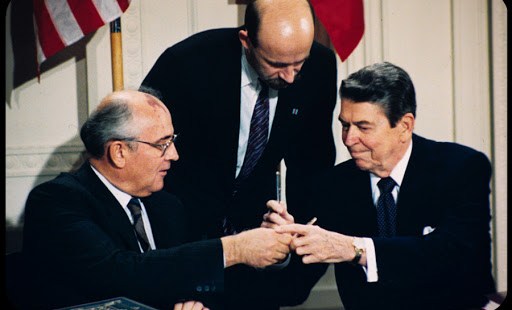 The president and the pope were men of hope.

In recent years, as scholars have explored Ronald Reagan’s foreign policy with greater access to primary-source documents, something utterly baffling to the conventional wisdom of his time (and ours) has come into focus: Reagan, determined to win the Cold War, was also eager to rid the world of nuclear weapons. And while many, in his time and ours, imagine those to have been incompatible goals, the 40th president of the United States was capable of holding both ideas in his head at once, and acting toward both ends.

Reagan’s straightforward definition of an acceptable end to the Cold War — “We win, they lose” — would have earned him a thumping “F” in any conflict-resolution seminar. That definition, however, grew out of a sophisticated grasp of the communist system and its irreformability: an understanding the man derided as a “B-movie actor” had gained the hard way, as president of the Screen Actors Guild, when he fought communists for control of Hollywood’s most glamorous union.

As for his nuclear abolitionism, Reagan, according to his arms control director, Ken Adelman, was appalled by the horrors of Hiroshima and Nagasaki and hated the idea that an American president could wreak immeasurably greater destruction. Thus Reagan’s Strategic Defense Initiative, far from being the cockamamie “Stars Wars” scheme it was promptly dubbed by political adversaries and journalists stuck in the conventional thinking of the era, was the technological expression of the president’s moral conviction that nuclear weapons were a grave danger that ought to be taken off-the-board in international public life.

A close examination of Reagan’s pre-presidential texts, and the diaries he kept as president, reveal a man with a keen insight into the Soviet Union’s vulnerability. Like John Paul II after June 1979, Ronald Reagan intuited that, for all his bluster, the Soviet emperor had far fewer clothes than conventional wisdom imagined. And, again like John Paul II, Reagan understood that the Soviet Union was ideologically vulnerable: that a steady, fact-based, morally-driven critique of communism’s abominable human rights record would rattle the men in Moscow, expose cracks in the Soviet system, encourage brave dissidents to exploit those cracks, and hasten the end of what Reagan called, perhaps undiplomatically but certainly truthfully, an “Evil Empire.”

What Reagan added to the mix was an understanding of the Soviet Union’s economic vulnerability. And he was prepared to exploit that vulnerability by launching a full-throttle American defense expansion that he knew the Soviets, obliged to try to counter by their own doctrine, could not match, given their system’s economic, technological, and bureaucratic incapacities. The Strategic Defense Initiative was, in a sense, the final straw here: by reason of his own system and its premises, Mikhail Gorbachev was unprepared to believe, much less accept, Reagan’s offer to share any workable missile-defense system; yet Gorbachev knew the USSR could not compete successfully in a new arms race when it was already falling behind in the old one; checkmate. As Ken Adelman puts it a gripping new book, Reagan at Reykjavik: Forty-Eight Hours That Ended the Cold War, “SDI never worked as Reagan wished. It worked better.”

Ronald Reagan understood, better than many churchmen, that the Cold War could be won on acceptable terms, rather than merely managed. Better than many churchmen, he understood that human rights pressures on the Soviet Union served the broader cause of freedom and gave a measure of protection to human rights activists and dissidents. And he understood, better than many churchmen but in harmony with the thinking of John Paul II, that the key to resolving the dangers posed by the nuclear deterrence system, in which the United States and the Soviet Union both had the capacity to “bounce the rubble,” was the collapse of the communist project and dramatic change in the governance of what was then the USSR.

It would be good if peace studies programs would wrestle with all this, not least in reassessing the 1983 U.S. bishops’ letter, “The Challenge of Peace.” I’m not holding my breath, but like Reagan and John Paul, I remain a man of hope.