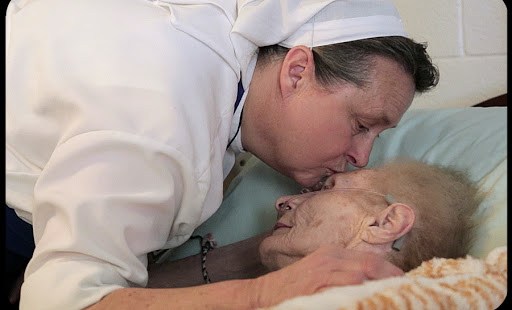 How one religious sister reluctantly became a nurse and transformed a home for the elderly and dying into a place of warmth and joy.

Many readers have probably seen firsthand the wildly unexpected directions that life can take when one eventually decides to follow God’s lead. He could even be called the God of second careers—perhaps because some of us weren’t listening very well when we were younger or maybe because he wanted us to acquire skills that he could later put to a higher purpose. In my last job in the USCCB Secretariat of Pro-Life Activities, we had a former architect, a would-be professor and no fewer than four "reformed" attorneys, including myself, in my 20-year tenure.

Few of us, however, can top Sr. Stephen Bloesl, a religious of the Sister Servants of Christ the King, for her succession of vocations within a vocation. She calls these moments when her life took a new exciting course “God winks.”

At a young age, she knew two things for sure: She definitely wanted to become a religious sister. She definitely did not want to be a nurse. She didn’t take chemistry in high school and didn’t want to give anyone shots. Of that she was sure.

But even as a teen, she enjoyed working as a candy striper and working with the elderly in nursing homes. When her community opened Villa Loretto Nursing Home in Mt. Calvary, Wisconsin in 1965, she was content to serve as a nursing assistant. She professed her vows in 1970.

Not long afterward, to her chagrin, a family grateful for the care their loved one had received at Villa Loretto established a scholarship to send one of the sisters to nursing school. The Mother Superior asked Sr. Stephen to consider it. She expressed reluctance, questioning her own ability to handle the difficult coursework, but eventually assumed it must have been God’s will.

She earned her nursing degree and life in the nursing home continued with the normal daily routines until one day when the Sisters acquired an orphaned lamb. Something about the foundling evoked tenderness and joy in the residents.

Then came the fateful day when Sr. Stephen happened to be in a pet shop and happened to hold a baby goat. This “city girl”  was enchanted by the kid’s cuteness and returned to Villa Loretto telling the other sisters that they simply had to get a baby goat for the residents to enjoy.

Bringing the baby animals into the residents’ rooms always puts a smile on their faces. Who wouldn’t feel happy cuddling a sweet little lambkin? But the animals are also a huge draw for visiting families with children. Typical nursing homes are not particularly child-friendly environments. There’s usually nothing of interest for children to do and even a beloved elderly family member may seem distressingly different to a child when dementia or physical illness take a toll. The nursing home may be the last place children want to visit on a weekend outing. But by adding a menagerie of animals to the mix, the atmosphere of Villa Loretto resembles a fair, complete with the squeals and giggles.

Nun, nurse, Director of Nursing, animal caretaker … Sr. Stephen has one more role to her credit: documentary film star. The award-winning documentary film producer Carolyn Jones, of Carolyn Jones Productions, decided to produce a feature-length documentary entitled “The American Nurse: Healing America.” She and her crew videotaped interviews of 103 nurses working in various capacities around the country. Six superhero nurses were selected to be featured in the documentary, including Sr. Stephen, for the unique and uplifting environment she has created at Villa Loretto.

It’s tempting to ask what’s in store next for this dynamic nun, who one minute is off helping birth a baby goat and the next is leading nurses in hymns while accompanying them on an instrument, as a peaceful farewell to a dying resident. But the truth is, God only knows. Wink.