The View from Mt. Bental, Israel 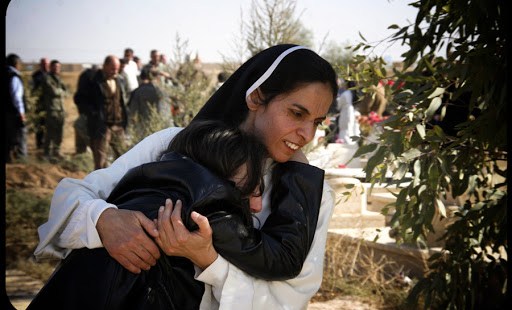 A recent visit to Israel made real and urgent the suffering and genocide of Iraqi Christians.

When I was in the Holy Land this past May, our group traveled to Mt. Bental, a former Israeli military outpost used during the 1967 Six Days War and again during the Yom Kippur War in 1973. During this conflict with Syria over the Golan Heights, the largest tank battle in military history took place. Syria’s 1500 tanks were opposed by only 160 Israeli tanks and yet somehow Israel still was able to force Syria to retreat. Politics aside, the story of the battle is remarkable.

As we stood at the top of Mt. Bental listening to our guide relate the details of the epic battle, my mind and heart were drawn elsewhere. Mt. Bental is a key strategic site for Israel because of its advantageous observation point. From Mt. Bental, you have a sweeping view of the Golan, as well as Jordan, Syria, and beyond. It’s the beyond that was calling to me that day.

When the story had ended and the conversation lulled, I asked the guide where Iraq was from where we were standing.
“See those mountains there?” he pointed. I nodded. “Iraq is just on the other side of them.”

Four hundred miles. Four hundred miles is about the distance to the lake cottage where we like to spend our family vacations. It’s about a 5 hour drive. I was standing about five hours away from Iraq.

In that moment, Iraq was (and still is) important to me because one of our sons had been deployed there for nearly a year with the National Guard.

When our children are small, we can coddle and console them when they fall and scrape their knees or when they’ve been bullied by the neighbor kid. When our kids are grown, we have to stand back and let them fight their own battles, so to speak, and the best we can do is offer them encouragement, advice and prayer. Our son had gone to fight someone else’s battle, and the best I could do was offer encouragement when we were able to have contact and prayer continuously.

Most parents can identify with their children’s up and downs because we’ve been through the same or similar circumstances ourselves. I’d never been through anything close to what my son had experienced, and had no sense for what it was like to go through deployment in Iraq. Standing on Mt. Bental and then traveling with my group into the desert gave me only the smallest taste of what it might have been like for him.

Since my Holy Land trip, news of the horrific plight of Christians in Iraq has broken, and I find myself traveling back to Mt. Bental in my mind’s eye. The area my eyes scanned in May isn’t only the place where my son was deployed; it’s also the place where my fellow Christians are being exiled from their homes, raped, mutilated, shot, beheaded and crucified simply because they profess belief in Jesus Christ. Their homes and businesses are being marked with the Arabic letter for “N,” for Nazarene, a derogatory Arabic term for Christian. The homes and businesses of Christians become property of the Islamic State. The Christian owners must convert to Islam, pay exorbitant fines, or be killed (or flee with nothing but the clothes on their backs).

ISIS (Islamic State in Iraq and Syria) is on a rampage to annihilate Christians and destroy Christianity once and for all, in Iraq, Syria, and potentially beyond. Their ideology knows no borders. Militants will continue to grow in number and power and more Christians will die. If official cowardice in the face of terror continues, perhaps the assault on Christians will not be limited to the lands I gazed at while standing on Mt. Bental. Perhaps someday the assault will occur on the lands I gaze on from my own back door.