Three Killed When Missile Hits Near Church in Syria 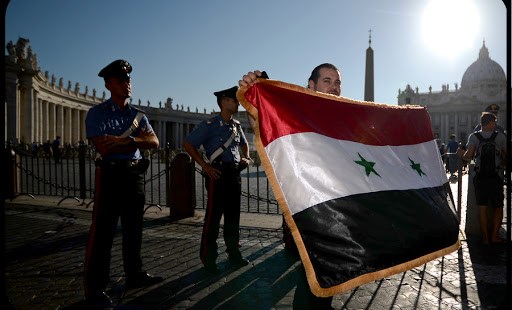 People were in the church for daily Mass.

Yesterday afternoon a missile launched from the areas of Aleppo controlled by the rebels fell in the area of the Armenian Catholic parish of the Holy Trinity, in the district of al-Meydan, causing the death of three Armenian adults, two sisters and a man.

The missile damaged the wall, a terrace of the rectory and broke the windows of the church, also causing damage to an altar where there is a statue of the Virgin Mary from Marash, symbol city of the Armenian Genocide.

Father Joseph Bezouzou said the strike took place around 6:15pm, when people were in the church for the daily Mass."If the missile had fallen at the exit of the Mass, it would have been a massacre," he said. "We thank the Lord."

The parish had organized for next weekend a gathering of young people, in order to ease the tremendous tension that has accompanied their everyday life for years. "We have decided to postpone everything," said Father Bezouzou, "because after what happened you cannot expose young people to new risks. But on Sunday, after Mass, we will plant an olive tree in the place where the missile fell. This is our only response to the bombs and violence that for years have tried to devastate our lives."