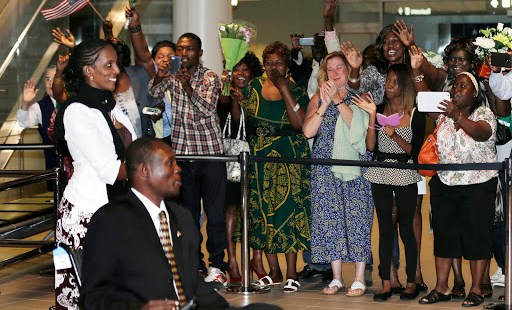 It’s a big jump from Sudan with its soaring summer temperatures to Manchester, N.H., where the mercury has gotten as low as -20 in the winter. But a significant Sudanese community has grown in the city, now augmented by one Meriam Ibrahim and her family.

The 27-year-old Sudanese woman, who refused to recant her Christian faith in the face of a death sentence, arrived Thursday in the United States, where she was welcomed first by the mayor of Philadelphia as a "world freedom fighter" and later by cheering supporters waving American flags in New Hampshire.

Ibrahim flew from Rome to Philadelphia with her husband, Daniel Wani, and two children, en route to Manchester, where they will make their new home. Wani, his face streaked with tears, briefly thanked New Hampshire’s Sudanese community on his family’s behalf and said he appreciated the outpouring of support.

The family was met at the airport by Gabriel Wani, Ibrahim’s brother-in-law, and dozens of supporters holding balloons, signs and flags. The crowd cheered as they stopped in the terminal, and several women reached out to hug Ibrahim.

"We’re just going to go and bring them home," Gabriel Wani said. "They want to come home, and they want to rest."

In a statement, Diocese of Manchester Bishop Peter A. Libasci, said, “We are relieved and grateful that a life is spared, a family reunited, and that the many who worked toward this end can understand even more personally the profound meaning of the words, ‘Blessed are the peacemakers, for they shall be called children of God.’”

Diocese spokesman Tom Bebbington said that Wani’s church, a parish where a significant “pan-African” community has grown up, will hold a celebration sometime in the near future to welcome Ibrahim. St. Anne-St. Augustin, which is situated in an area where there are also immigrants from Vietnam and Latin America, offers an “African Mass” on the last Sunday of each month.

“We reached out to the family through Daniel’s brother, Gabriel,” Bebbington said. “Catholic Charities has reached out to them to offer help—someone coming to the US with relatively few resources who’ve been through this traumatic experience, and with a newborn as well as a young child in tow. So we’ll be offering them whatever help we can, for example, through our Our Place program, which is a place offering a multitude of resources, anything from furniture to parenting classes.”

Manchester, a city of 110,000 residents about 50 miles north of Boston, is northern New England’s largest city and has been a magnet for immigrants and refugees for decades. “At least for 150 years it’s kind of the place where immigrants come and step on to the first rung of the ladder, from French Canadians working in the mills in the 19th century to today,” Bebbington said. There are about 500 Sudanese living in the city, which is just north of the Massachusetts state line.

And the town is “still kind of a center for manufacturing,” he said, so “ven if your English isn’t perfect you can still get a good job and work your way up.”

“So there’s certainly an awareness of immigration issues,” Bebbington said. “But her story was so extreme that I don’t think you need to be Catholic or Christian to be touched. Lots of people came to us asking, ‘How can we help?’… We’ve had folks reach out with offers of material help, money, baby gear. Now they know they’re here they’ve been contacting Catholic Charities. A woman got in touch from California and said, ‘I knitted a baby blanket and put it in the mail. Can you make sure Meriam gets it?’”

Ibrahim’s husband, who previously lived in New Hampshire, had been granted U.S. citizenship when he fled to the United States as a child to escape civil war, but he later returned and was a citizen of South Sudan.