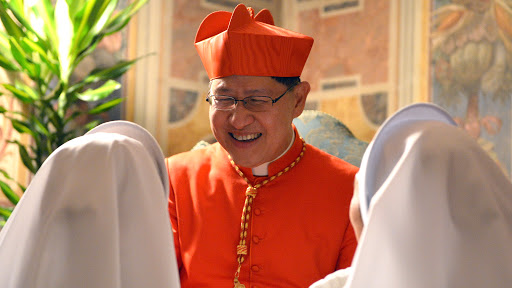 Pontiff will “walk in John Paul’s footsteps” when he visits Philippines in January.

In less than two weeks’ time Pope Francis will embark on his first Apostolic Journey to Asia when he flies to Korea August 14.   Moreover his first foreign trip of 2015 – confirmed this week by the Vatican – will be a return journey to the continent, this time to Sri Lanka and the Philippines.

“The Holy Father has captured the imaginations not only of Catholics and Christians in Asia but even of the non-Christians,” says Cardinal Louis Antonio Tagle, Archbishop of Manila, the Philippines.

In a lengthy interview with Emer McCarthy, Cardinal Tagle says that from the outset of his pontificate, Pope Francis expressed his deep desire to visit the churches of Asia; he speaks of how the Pope has "ignited a flame" in Asian minds; of the importance of Asian Youth Days in faith formation;  of how the Philippines is preparing for the Papal visit in January 2015 and of how the upcoming Synod on the Family is not just about divorced and re-married Catholics.

As this is the Pope’s first visit to Asia, has it sparked any interest in wider society is there an awareness that he is coming?

The Holy Father has captured the imaginations not only of Catholics and Christians in Asia but even of the non-Christians. They see his sincerity, how he embodies the Gospel truth in a way that is noble, down to earth, so near and yet quite transcendent. In Asia people love that.  While we are very respectful of authority, in our hearts we want to see that transcendent authority in the flesh, coming to us and so we are just fascinated by this, and the Holy Father has ignited a flame in the hearts and minds of many Asian people.

The Pope will attend celebrations for the Asian Youth Day. Is this the Asian version of the World Youth Day?

The Asian Youth Day celebration happens in between two World Youth Days (WYD), to bring to the youth here in Asia the fruits of the WYD and also to prepare for the coming WYD.  My former diocese in Emus was the host diocese for the last Asian Youth Day so I was part of the team that welcomed the youth of Asia. So I remember clearly when the youth delegates and I presented the Cross to the next host diocese from Korea. The Asian Youth Day is not as big as the WYD. In fact the organizers want to keep the official delegates to around 2000 so that the delegates can experience intense formation, intense moments of prayer, intense community building. But because the Pope will be coming I am sure more young people will be invited and I know that the young and not so young from the Philippines are planning to go to Korea to see the Pope.

What has the reaction been to the announcement of the 2015 Philippines visit, and how are you preparing for it?

The Filipino people are just ecstatic.  And what a coincidence! Twenty years ago in January, Pope John Paul II came to Manila for the World Youth Day, 1995…that was a pure coincidence but how God works! The historic visit of Pope John Paul encountering the people of the world. Now Pope Francis is following in his footsteps.   But he is not just encountering young people.  He is coming especially to meet with the people who suffered on account of the typhoons and earthquakes that hit the country last year.

Immediately after the Conclave in one of our conversations I invited the Holy Father to Asia, especially the Philippines, where you have almost half of the Christian population of all of Asia.  He told me that he would love to go to Asia, especially because due to his age and health reasons Pope Benedict was not able to do a pastoral visit in Asia.  He repeated this to me last June—and this was before the Typhoon—I want to go to Asia.  So he even asked us to start thinking of a program. And since in the Philippines 2014 was dedicated to the laity we thought we could have this as a theme for the Holy Father. Then the Typhoon came. The visit now acquired a new configuration. It’s not just a general or generic visit, but especially to show the Holy Father’s solidarity with the victims and survivors and to pray with these people. And I also hope that he will be inspired by the resilience, tenacity and deep faith of the people who have gone through horrible times.