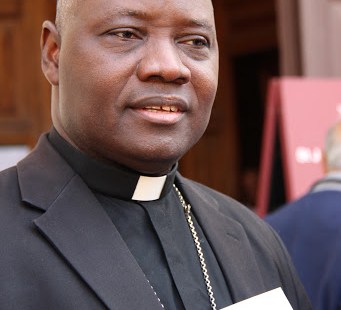 Archbishop Ignatius Kaigama of Jos, president of the Nigerian bishops’ conference, recently spent a few days in New York—a brief respite from his increasingly violence-ridden country, where the jihadists of Boko Haram continue to kill indiscriminately, Muslims and Christians alike.

Within the span of a week in late July, the group set off two bombs that killed 100; an assault on a Catholic church in the city of Kano left five dead; and, in a highly disturbing development, girls as young as 10 are becoming suicide bombers.

Meanwhile, July 30 was the 100th day since Boko Haram’s kidnapping of nearly 300 young girls, most of them Christians.

The archbishop spoke with international Catholic charity Aid to the Church in Need July 31.

Leaving Islamic extremism aside for a moment, what is the relationship between Christians and Muslims like in Nigeria?

There is a fairly healthy competition between the two. It is often a struggle about geographical expansion and the politics of data. Each religious group is claiming numerical superiority, but the records don’t bear that out. There is more pronounced inter-religious tension in the north.

In the south there is a more liberal approach to Muslim-Christian relation. There is a better understanding of marriage between Christians and Muslims and the spirit of fanaticism or fundamentalism is less pronounced. In the north, generally, a Muslim man can marry a Muslim or a Christian woman; but a Muslim woman cannot marry a Christian. In the south, though there are cases of prominent Muslim men marrying Christian women and allowing them to continue to practice their faith.

That the Muslim north has been dominant politically is a legacy of colonialism. When it came to the transfer of power in 1960, the British chose to take advantage of the indirect rule and the practice of shariah, which made for a certain stability and order.

You are a believer in dialogue.

We do our best to create harmony and understanding. There is the Christian Association of Nigeria and the Nigeria Interreligious Council. These bodies bring Muslims and Christians together. Let’s explore where we come together and where we differ. We are not just fighting each other—that is a misleading caricature of our country.

But given the differences between the two, what can dialogue really achieve? There is such a theological and philosophical gap.

In the midst of darkness or violence it is better to light a candle—a candle of hope to dispel the terrible darkness of violence. True, we cannot get into theology because there won’t be any progress. There is what we call the “Dialogue of Life.” There is no alternative than to come together, as human beings—drink tea or coffee together. Let’s get to know each other. There can be some cross-fertilization of ideas. The “Dialogue of Life” means simply, ‘your life affects mine, and mine affects yours.’ It is quite simple. It is not about producing instant results, but to be friends and to be engaged in conversation. I started this process in a modest way in Jos, where things were very bad when I was first appointed to the archdiocese.

Is the government simply not up to the task of properly managing the country? Things were pretty bad even before Boko Haram burst upon the scene.

Our leaders simply are not very sensitive to the poor, even when aid is available. The Church, with its limited possibilities, tries to promote dialogue, providing relief and in terms of simply being there. We stand out prominently—not to boast—because we have been helpful beyond political and religious divides. This good will comes from the heart, and the people appreciate it. People come to me for help and often I feel embarrassed because I can do so little. We end up being social workers. I thought my work was just to bless people … but I also have to worry about water and electricity.