With No Move to Cancel Black Mass, Oklahoma Bishop Calls for Fasting 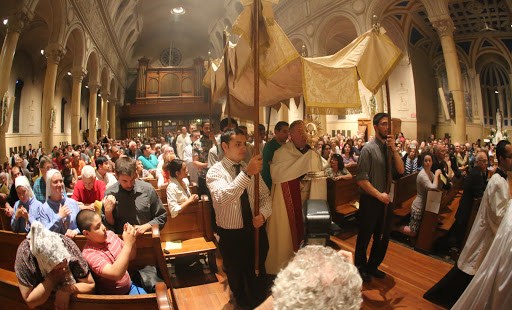 The latest show of support for the local Church of Oklahoma City in the face of a planned “black mass” has come from a neighboring diocese in the state.

Bishop Edward J. Slattery of Tulsa, Okla., is asking all Catholics in his diocese to fast and pray from Aug. 6-15 so that the black mass, planned for Sept. 21, in the Oklahoma City Civic Center, may be cancelled.

Bishop Slattery issued his appeal this weekend through a letter reproduced in all parish bulletins.

“As a part of Satanic worship, a Black Mass attempts to invert the action and meaning of the Eucharist in order to mock Christ’s sacrifice and worship Satan through an orgiastic ritual of pain and perversion,” Bishop Slattery wrote. “It blasphemes everything which we hold as sacred and redemptive; and the spiritual dangers it poses ought not be dismissed. Since the Civic Center has not responded positively to the pleas of the Archbishop of Oklahoma City not to host this event in a taxpayer supported public venue, I am asking the faithful Catholics in the Diocese of Tulsa to fight this blasphemy through prayer and fasting.”

In a separate letter to pastors, Bishop Slattery asked that every priest in the diocese pray a "minor exorcism" prayer "for the safety of the people he serves." This prayer, composed by Pope Leo XIII, "is to be prayed privately and without ceremony by the pastor (and associate) standing at the altar,” he explained.

Aleteia first reported on plans for the black mass July 1. At that time, Jim Brown, general manager of the Civic Center, said the public facility had no right to turn down a group that wanted to rent space there, as long as the group was law-abiding.

But Archbishop Coakley argued that there should be other considerations.

“It is hard to imagine the Civic Center turning a blind eye and allowing a group to use its facilities to burn a copy of the Koran, or to conduct an overtly anti-Semitic performance. Nor should they!” he said. “Why is this any different?  There are community standards to uphold.  And these prohibit works that are ‘illegal, indecent, obscene, immoral or in any manner publicly offensive.’ A Black Mass certainly qualifies as offensive, obscene and immoral.  Its sole purpose is to show hostility toward Catholicism and all that is sacred to Christians.”

"In fact, our City Manager, Mr. Jim Couch has had two sit-down meetings with the Archbishop," she said today. "We do not specifically know what was discussed in these meetings."

Lindsey-McClintock said the event is still scheduled to be performed on Sept. 21. "As of this morning, a total of 16 tickets have been sold. We will reiterate that the Civic Center is not underwriting the event (the rental group is paying all associated event costs), nor are we paying for any outside advertising, as we do not advertise or promote any show held in our facility aside from a listing on our website (language provided by the renter/show producer). The individual renter is responsible for all promotional communications and publicity."

The event is being produced by an Oklahoma City Satanic church, the Dakhma of Angra Mainyu.

With no apparent willingness on the city’s part to cancel the event, Bishop Slattery asked his Tulsa flock to make a keep the nine days prior to the Feast of the Assumption as an “extraordinary period of prayer and penance,” abstaining from all meat from Aug. 6-14.

“I am also asking that you consecrate your hunger with a daily recitation of a decade of the rosary and the familiar Prayer to Saint Michael,” he said, adding the encouragement to “be strong.”