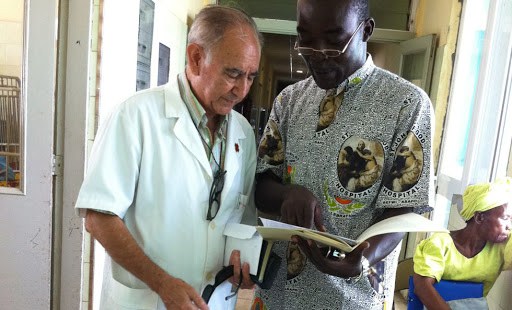 Brother Patrick Nshamdze, director of St. Joseph’s Hospital in Monrovia, Liberia, died after contracting the Ebola virus, according to Fides news agency. Brother Nshamdze, a native of Cameroon, had studied in Rome and was a member of the Hospitaller Order of Saint John of God.

The Ebola virus is spreading alarmingly in West Africa. After Brother Nshamdze’s death, the hospital was isolated, and three confreres—two Spaniards and a friar of Ghana—who had assisted him when there was no certainty of diagnosis, have undergone tests.

A serum that that is hoped to provide a cure for ebola has been tested on two sick missionaries in Liberia, currently in quarantine in St. Joseph Hospital. In the U.S., the serum was used on two Americans who became ill in Liberia and now both feel better: Kent Brantly, the first doctor, already returned home on Sunday and is at Emory University Hospital in Atlanta, and Nancy Writebol, a nurse, arrived today.

"The authorities have isolated all public offices and also our hospital in order to carry out the operations of disinfestation," Brother Pascal Ahodegnon, general councilor in charge of the African area of the Hospitaller Order of Saint John of God, told Fides. "Another of our confreres, of Spanish nationality, and two sisters have been hospitalized."

Brother Ahodegnon says that "Liberia is isolated, but we continue to provide assistance with our facilities while our NGO is sending aid, which unfortunately is not enough to make up for all the needs."

"As there is still no specific cure for Ebola, what is needed are sanitizers, gloves and masks to protect healthcare workers as well as IVs and anticoagulant to rehydrate patients and stop bleeding. So far these are the only measures to try to prevent the disease from spreading," he said.

On Monday, the World Health Organization said the death toll had increased to 887 deaths in Guinea, Sierra Leone, Liberia and Nigeria, and that more than 1,600 people have been infected.

The American missionaries infected with Ebola are getting an experimental drug so novel it has never been tested for safety in humans and was only identified as a potential treatment earlier this year, thanks to a longstanding research program by the U.S. government and the military, the Associated Press reported. Nancy Writebol and Dr. Kent Brantly, who work for the aid group SIM USA, are improving, although it’s impossible to know whether the treatment is the reason or they are recovering on their own, as others who have survived Ebola have done. They were infected while working in Liberia.

In a worrisome development, the Nigerian Health Minister said a doctor who had helped treat Patrick Sawyer, the Liberian-American man who died July 25 days after arriving in Nigeria, has been confirmed to have the deadly disease. Tests are pending for three other people who also treated Sawyer and are showing symptoms.

There is no vaccine or specific treatment for Ebola, but several are under development.

The experimental treatment the U.S. aid workers are getting is called ZMapp and is made by Mapp Biopharmaceutical Inc. of San Diego. It is aimed at boosting the immune system’s efforts to fight off Ebola and is made from antibodies produced by lab animals exposed to parts of the virus.

In a statement, the company said it was working with LeafBio of San Diego, Defyrus Inc. of Toronto, the U.S. government and the Public Health Agency of Canada on development of the drug, which was identified as a possible treatment in January.

The drug is made in tobacco plants at Kentucky BioProcessing, a subsidiary of Reynolds American Inc., in Owensboro, Kentucky, said spokesman David Howard. The plant "serves like a photocopier," and the drug is extracted from the plant, he said.