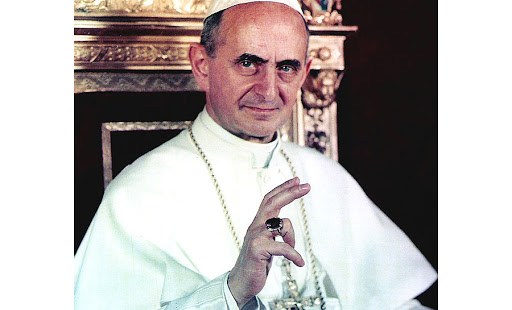 On the 46th anniversary of the encyclical, his words prove to be prophetic.

Forty-six years ago last week, Pope Paul VI threw a monkey wrench into the machinery of the sexual revolution, which had created an expectation of doctrinal change in the minds of many Catholics.

In the face of mounting pressure to keep up with the times, he issued the Catholic Church’s official response in 1968: Humanae Vitae.  That document reaffirmed the traditional condemnation of artificial birth control.  It consequently ignited controversy across the globe and elicited widespread dissent.

Today, however, Humanae Vitae’s values are being taken more seriously by a new generation of young Catholics who came of age under Pope John Paul II.  Just prior to my own priestly ordination, for example, I was required to sign an oath of fidelity he composed, promising at the very least to “adhere with religious submission of will and intellect to the teachings” of the Catholic Church.

When I took that oath, I knew that John Paul II had presented an influential series of 130 lectures on human sexuality — interrupted only by his assassination attempt in St. Peter’s Square — entitled "The Theology of the Body."

He used those addresses to boldly develop the themes presented in Humanae Vitae.  But he situated them in their proper biblical context, and he drew on his own pastoral experience and philosophical expertise.  His biographer called these reflections “a theological time-bomb set to go off with dramatic consequences.”

His lectures explored the meaning of our embodiedness — as well as the differentiation and complementarity between men and women — which he saw as being integral to our personhood, rather than merely extrinsic.

He proposed certain moral truths built into the structure of the human experience.  For example, self-giving — not self-assertion — engenders authentic human flourishing.  That spiritual truth is expressed by the human body in the total, mutual self-donation of sexual love.  In fact, sexual expression speaks its own language, which contraception denies by arbitrarily manipulating the procreative potential of the sexual embrace.

John Paul II also reaffirmed Humanae Vitae’s call for “responsible parenthood,” acknowledging that every couple must determine for themselves the number of children they are able to raise well.  In other words, prudently building a family precludes abandoning oneself to biological determinism.

And so, even though both popes rejected contraception, they recommended what Catholics call “natural family planning.”

The distinction between these two approaches lies in the fact that the human body is not merely fertile but rhythmic.  Natural family planning allows those who practice it to remain open to life, even while it provides for the regulation of birth.  Unlike contraception, which stifles nature, natural family planning cooperates with it.  That is, nothing is done to alter the sex act itself, so as to render infertile that which is, in principle, fertile by divine design.

Admittedly, this natural approach requires discipline, which is difficult.  But experience confirms that such difficulties often redound to the benefit of communication, cooperation, and strength of will.

That’s why I refer couples to Marquette University’s Institute for Natural Family Planning in the School of Nursing.  They’ve developed their own method — the Marquette Model — that achieves a 98 percent effectiveness rate.

Most couples are responsive to that referral, but some people think a priest should keep quiet because he isn’t married.  Of course, I haven’t experienced a marriage of my own from the inside out.  But I am invited to encounter many marriages — from a privileged point of view, as a counselor and confessor — in the trusted way that only a celibate priest can.