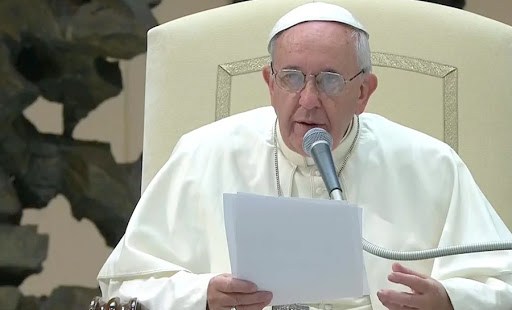 Francis delivers catechesis on the Church as a new people, founded on a new covenant.

In the first General Audience since his summer break, Pope Francis resumed his Catechesis on the Church and the People of God, but his mind was also on the tensions and recent conflict in the Middle East and an earthquake in China.

The death toll in Sunday’s earthquake jumped to 589 on Wednesday as search and rescue teams found scores more bodies while pushing into isolated mountain communities to clear debris from collapsed homes, the Associated Press reportedd. The Yunnan provincial government said more than 2,400 people were injured in the 6.1 magnitude quake in the mountainous farming region of Ludian county.

The region is prone to earthquakes. In 1970, a magnitude-7.7 earthquake in Yunnan killed at least 15,000 people. In September 2012, a series of quakes killed 81 people. In May 2008, a powerful quake in Sichuan province left nearly 90,000 people dead.Expressing his closeness to the people of the province of Yunnan, the Holy Father offered his prayers for the victims and their families, for those injured and those who lost homes in the disaster.

Earlier greeting pilgrims from the Middle East he asked those present to “pray hard for peace” in the region.

He made the plea in the Paul the VI hall which provided both the Pope and the gathered faithful with shelter from the heat of the Roman sunshine.

Reflecting on Wednesday’s catechesis, Pope Francis described how the Church is a new people, founded on a new covenant. He explained, however, that the newness brought by Christ does not set aside what went before, but brings it to completion.

Then focusing on one of the great saints of the Church, John the Baptist, the Pope underlined how this man of God is a bridge between the prophecies and promises of the Old Testament and their fulfilment in the New.

John, said the Holy Father, “points to Jesus and calls us to follow him in repentance and conversion.”

Looking to the Gospel of St. Matthew for inspiration, Pope Francis noted that Jesus tells us that our Christian life will be judged on how we treat him in the least of our brethren. He also added that in the Beatitudes, Jesus shows us the way in which, with his grace, we can attain authentic happiness.

The Holy Father concluded his catechesis by giving the pilgrims gathered some homework to do. He asked them to always keep a little book of the Gospels handy, whether it be in their pockets or in a bag, so they can read the Beatitudes contained in Matthew, that have been given to us by Jesus.