The Genocide of Sensitive Men 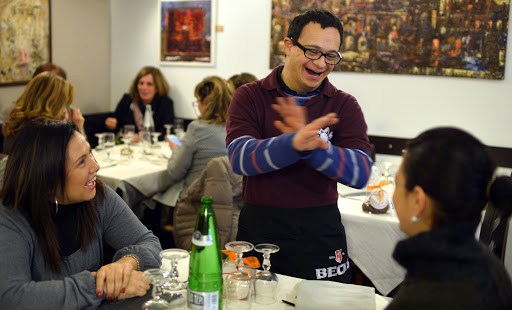 AFP PHOTO / GABRIEL BOUYS
A picture taken on January 28, 2014 in Rome, shows Alessandro Giusto (C), a young man with Down syndrome, jokes with clients as he works in the restaurant "Locanda dei Sunflowers" . This restaurant is born with the overall objective of promoting the employment of people with Down syndrome, ennobling and giving dignity to the person through an individual path, training and job placement. AFP PHOTO / GABRIEL BOUYS
Share
Print
William Van Ornum | Aug 07, 2014

Boys with Klinefelter syndrome are being aborted due to ignorance and false assumptions.

Births of children with Down syndrome have sharply declined in recent decades for the worst possible reason: 92% of those diagnosed before birth with Trisomy 21 are aborted. Another common genetic anomaly, Klinefelter syndrome, is also often diagnosed in utero, with the same tragic result—due mainly to ignorance and fear.

I’d like readers to meet two people born with these chromosomal differences.* Then, you be the judge if boys with Klinefelter’s deserve to be killed before birth.

“Mom and Dad, I need some chemicals or hormones or whatever you call them,” 15-year-old David said. He was pleading with his parents to consult with the family doctor because he had not enetered puberty. He was embarrassed and taunted in gym class and teased throughout the school.

A trip to the family doctor brought some encouragement. “David will grow out of this soon, he is just a late bloomer,” their physician said. David didn’t buy this and looked at the floor and murmured something at the doctor while his parents and the doctor congratulated themselves for their collaboration.

In the next 18 months, other physical differences appeared which separated David and his peers. His voice did not deepen. His shoulders were not as wide as his hips. There were small testes. No matter how many push-ups he did, he never developed upper arm strength. He even discovered a lump on one breast. His doctor did watch that carefully but eventually it disappeared. As a senior in high school he still looked like an eighth grader. He never tried to date because he realized girls would probably turn him down.

David became increasingly belligerent at home and in school. He started to throw and break things and his mild reading problems became worse. Finally, his parents took him to a second pediatrician who took one look at David and said, “I’m pretty sure this is Klinefelter syndrome. Let’s order genetic tests.”

These tests took two weeks because special procedures were needed at the lab. When the results came back indicating Klinefelter syndrome (chromosome karyotype 47xxy) David looked relieved and told everyone “I knew something wasn’t right. Now what can we do about this?”

57-year-old Jonathan is a clinical social worker who is highly respected for his work as a family therapist. He displays compassion, understanding and a highly intuitive sense about understanding the complex problems, divided loyalties, and unhelpful alliances in troubled families. He has been happily married for 32 years and his two children were then finishing college.

On the weekday that he taught family therapy courses at a prestigious institute in a large city, he fell in his bathtub. His leg twisted as he went down, breaking the leg but protecting him from worse injury such as a broken hip. Nevertheless, he had to be hospitalized for a week.

A new specialist at the medical center, a "hospitalist"—someone who specializes in treating hospitalized people—believed in taking an extremely thorough life history for all his patients. Through this he often discovered other medical problems that had been overlooked, sometimes for decades.

During the interview, he learned that Jonathan experienced difficult teen-age years. Being a late bloomer who was small for his age, varsity sports were not open to him. He frequently went to the library after school,discovering that books were a vehicle that gave him the independence to go anywhere or learn anything.

By the end of college he felt much more comfortable around his peers and didn’t think he stood out from the group as he did in high school. Still, he remained unfocused as to a career and did not settle on the goal of becoming a clinical social worker until he was about 25. At this age, he accepted something he used to rue