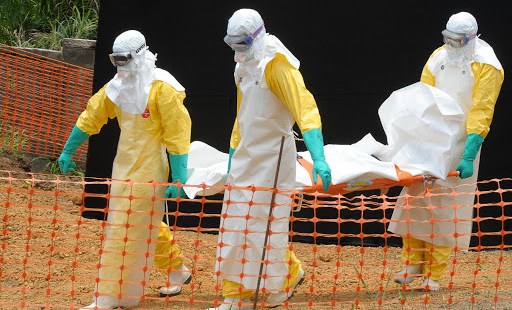 AFP PHOTO / SEYLLOU
GUINEA, GUEKEDOU : Staff of the 'Doctors without Borders' ('Medecin sans frontieres') medical aid organisation carry the body of a person killed by viral haemorrhagic fever, at a center for victims of the Ebola virus in Guekedou, on April 1, 2014. The viral haemorrhagic fever epidemic raging in Guinea is caused by several viruses which have similar symptoms -- the deadliest and most feared of which is Ebola. AFP PHOTO / SEYLLOU
Share
Print
Catholic News Agency | Aug 08, 2014

The Catholic Church plays a fundamental role in responding to the worst outbreak of Ebola infections in history, a Holy See collaborator has explained.

“The Catholic Church manages health facilities, and so it will be able to care for Ebola-affected people whenever the structures have the capacity to keep the infected people in isolation,” Msgr. Robert J. Vitillo told Catholic News Agency.

Msgr. Vitillo is special advisor to the Rome-based Catholic relief organization confederation Caritas Internationalis on HIV/AIDS. He also heads Caritas’ delegation to the United Nations in Geneva and collaborates with the Holy See.

He said that the Church is working on three levels to help respond to the epidemic: the cure of infected people, preventive education to avoid a pandemic, and pastoral education.

Already before the outbreak, the Church had been working to prevent an epidemic and to educate people in common hygienic procedures.

“Working on the ground, we were aware of this extremely dangerous disease for months, and worked really hard to educate communities,” Laura Sheahen, communications officer for Caritas Internationalis, told CNA Aug. 7.

Sheahen said that the organization is working to expand its activity “now that the epidemic is spreading very quickly.”

“There is a need for international funding to help Caritas in developing their work with communities,” she said. “We have a lot of courageous priests, volunteers and parish workers who are working incredibly hard on the ground.”

A World Health Organization survey reported that between 40 percent and 70 percent of African health facilities are the property of or managed by Catholic churches. In many countries the Catholic Church has almost half of the local health facilities.

However, Msgr. Vitillo said, “in situation of crisis like that of the Ebola outbreak, it is difficult to meet all the needs of the population, and it is especially difficult to have access to resources, to supplies.”

“At the moment, we are organizing an emergency appeal, trying to buying supplies,” he explained, adding that this work requires “collaboration with local governments, with international structures and with pharmaceutical companies, which are the producers of supplies.”

The Caritas advisor said that there are presently no medicines able to attack the Ebola virus.

He suggested that many pharmaceutical companies are reluctant to spend so much money on Ebola research. Although the virus has caused “great damage” it is “not spread all over the world.”

Holy See representatives took part in a two-day emergency meeting in Geneva to determine whether the outbreak constitutes a public health emergency and how to address it.

“Church is very much involved in combating the epidemic, it is part of its history. We have always worked a lot during the various pandemics,” he noted.

The Caritas adviser recounted that the Church has also an historical role in the discovery of the Ebola virus. The virus’ co-discoverer, Dr. Peter Piot, was working as a missionary doctor in the Zaire when he helped discovered Ebola. According to Msgr. Vitillo, Piot “always spoke very well of his experience with nuns of the hospital” for which he worked.