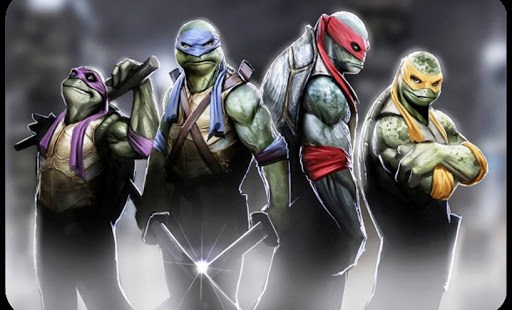 The kids will get a kick out of the Turtles, and you will as well.

Okay, let’s get a couple of things cleared up about this new version of "Teenage Mutant Ninja Turtles" before we even get started. First off, Michael Bay did not direct this movie, he just produced it. So, basically, that means Bay’s primary contribution was securing money and spending it on the people who actually made the film. Which in turn means the movie is not necessarily another one of Bay’s jumbled messes of loud, incomprehensible action scenes.

It does look like it’s going to be that way at first. The opening scene has two people simply standing on a pier talking and yet it’s inexplicably filmed in such a spastic manner that I strongly suspect someone was poking the cameraman with cattle prods. I don’t know, maybe Bay stopped by the set and guest directed the opener, because the rest of the movie isn’t really like that. In fact, there’s a rather good extended action sequence later in the film in which the Turtles, an army of ninjas armed with rocket launchers, a tractor trailer truck, and a few other vehicles are all tumbling down the side of a snow covered mountain, and you can actually follow everything that’s happening. No way could Michael Bay pull that off.

The second thing is Megan Fox, who plays intrepid wannabe-reporter April O’Neil, doesn’t really have to act in this film, so the argument over whether she actually has the ability to do such a thing or not is moot. Her bland, generic character exists in this film solely because there has always been an April O’Neil of some kind in the various iterations of "Teenage Mutant Ninja Turtles" and there probably always will be. Fox says her lines without flubbing them and that’s about all that is required.

Now, if that description of the non-CGI character who has the most screen time in the movie doesn’t sound very promising, then "Teenage Mutant Ninja Turtles" probably isn’t for you. Despite the valiant efforts of Will Arnett as April’s hapless sidekick Vernon and William Fichtner as suspicious businessman Eric Sacks, there just isn’t much depth to the human characters in the movie.

Oh sure, Tohoru Masamune snarls convincingly as Shredder, but since he spends most of his time wearing full body armor, it could be anybody inside there and it wouldn’t matter. Whoopi Goldberg also shows up briefly as April’s disbelieving editor, but, frankly, her character is so innocuous that I all but forgot she was in the movie until I ran down the cast list afterwards. Even more so than in the recent "Dawn of the Planet of the Apes," the humans in this movie are pretty nondescript.

To be honest, the story isn’t much better. There’s a bunch of bad guys who want to poison most of New York and rule what’s left and the only possible cure lies in the mutagen oozing around inside the Turtles’ bloodstreams. There’s some backstory that connects April and Master Splinter and the Turtles in a way that I don’t think has been done before. And yes, there’s plenty of action, including a big sequence near the end set way up high atop a skyscraper, thereby insuring that large chunks of debris can fall onto the crowds gathered below. I’m convinced the screenwriter’s guild requires that every one of their members pen such a scene at least once a year. It’s the only reasonable way to explain why such a scene shows up in every other movie these days. But, back to the point, the by-the-numbers script never rises above that of your standard Saturday morning cartoon.

Fortunately, the cartoon this particular movie is based on is named "Teenage Mutant Ninja Turtles," and the titular characters themselves are surprisingly true to form. Though they may look a little meaner in their latest gritty CGI incarnation, and even though they say a couple of choice words that would never be allowed on Saturday morning TV, the heroes in a halfshell should be quite recognizable to their fans. Leonardo is still the stoic committed leader, Donatello is still the nerdy brains of the outfit, Raphael is still the short tempered bruiser, and Michelangelo is… well, he’s still Mikey, enough said. All the personalities (and, yes, unlike the human characters, the CGI creatures in this film have some) remain intact.