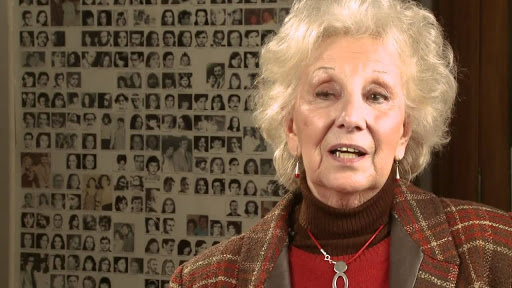 After 36 years, Estela de Carlotto got to know the identity of her grandson, who was born in prison and torn from the arms of his mother five hours after birth.

Pope Francisco was "moved" at the news of the recovery of the identity of the grandson of Estela de Carlotto, the president of the Grandmothers of Plaza de Mayo, according to papal ceremonial official Bishop Guillermo Karcher.

After 36 years, the Argentine press recently revealed the identity of Estela’s daughter Laura’s son, who was born when his mother was imprisoned in the "La Cacha" clandestine center during Argentina’s military dictatorship.

Five hours after birth, the child was torn from Laura’s arms and then delivered to a couple that could not have children. This couple then adopted him.

In statements published by the Italian newspaper "Avvenire," the prelate explained that the news stirred up deep emotion in the Pope, "as in all of us Argentines: it affects a part of our history and Mrs. Carlotto’s reunion with her grandson is a ray of light."

"God wants to continue rewarding perseverance in love, which nourishes and strengthens the spirit of national reconciliation, and makes real what the Song of Songs prophesied: ‘Love is stronger than death,’" added the Pope’s collaborator in statements to the Argentine news agency Telam.

Pope Francis had received Estela de Carlotto in a general audience on April 24, 2013. At that time, she asked for help to find information in Church files in Argentina and at the Vatican on the children of the "disappeared" during the dictatorship in Argentina. The Pope replied: "You can count on me."

Laura had named her son Guido. Now the Argentine press has revealed that the adoptive family gave him the name of Ignacio Hurban. He has discovered his origin, since personal doubts led him to submit voluntarily to a DNA test, which revealed his biological origin.

He lives in Buenos Aires in the city of Olavarria. He is a pianist, arranger, and composer by profession, director of the music school "Rossi Brothers," and has released several albums.

Jesús Colina is the editor-in-chief of Aleteia. This article originally appeared in Aleteia’s Spanish edition.