Christians Feel Abandoned in Spite of Obama’s Action in Iraq 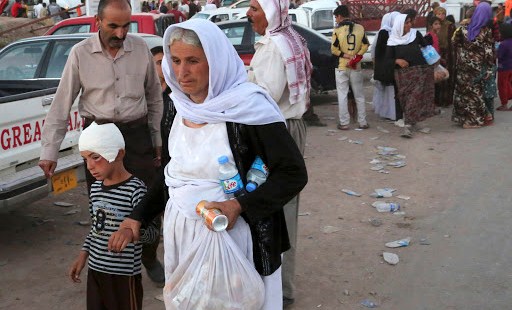 Patriarch Sako “disappointed” by limited response from US.

Using words like "dreadful," "disaster," and "deplorable," Chaldean Patriarch of Baghdad Louis Raphael I Sako described the chaotic situation of refugees forced to leave their ancestral villages in Iraq because of Islamic fundamentalist militants.

Patriarch Sako also said he was disappointed in President Barack Obama’s decision "only to give military assistance to protect Erbil." While the Islamic terrorists are strong and well-funded, the United States is "not up to a rapid solution to give hope specifically as they are not going to attack the ISIS in Mosul and in the Nineveh Plain."

Patriarch Sako, president of the Assembly of the Catholic Bishops in Iraq, said in a statement today, "Death and sickness are grabbing the children and elderly people among the thousands of refugee families spread over the Kurdistan Region who lost everything in the recent tragic developments while the ISIS Militants are still advancing and the humanitarian aid is insufficient."

And yet, the patriarch’s report seems tame compared to other gruesome details emerging from Iraq. Anglican Communion News Service reports that the five-year-old son of a founding member of Baghdad’s Anglican church was cut in half during an attack by the Islamic State on the Christian town of Qaraqosh.

"In an interview today, an emotional Canon Andrew White told ACNS that he christened the boy several years ago, and that the child’s parents had named the lad Andrew after him. ‘I’m almost in tears because I’ve just had somebody in my room whose little child was cut in half,’ he said. ‘I baptized his child in my church in Baghdad.’”

Later on Sunday, though, there was better news for Christians and other religious minorities. Kurdish forces retook  two towns from the Sunni militants that have seized large parts of northern Iraq, said a senior Kurdish military official, amid of a building international response that has included aidrops and airstrikes.

Brig. Gen. Shirko Fatih said the Kurdish fighters were able to push the militants of the Islamic State group out of the villages of Makhmour and al-Gweir some 45 kilometers from Irbil, in one of the first victories by the Kurdish forces that until now have been in retreat. The victories by the radical Sunni militants that adhere to an extremist intolerant interpretation of Islam have sent tens of thousands of the country’s minorities fleeing from their homes in fear in a situation that has grabbed world attention.

The United States announced a fourth round of airstrikes Sunday against militant vehicles and mortars firing on Irbil as part of its small-scale series of attacks meant to discourage the Sunni fighters from endangering U.S. personnel near the Kurdish capital.

During a visit to Baghdad, France’s foreign minister said that Paris will provide "several tons" of aid to hundreds of thousands of internally displaced people and called upon leaders in Baghdad to unite against Sunni militants who have seized large parts of the country.

Speaking at a press conference with Iraq’s acting Foreign Minister Hussain al-Shahristani, Laurent Fabius said his visit is aimed at boosting humanitarian efforts in northern Iraq, where tens of thousands of minority Yazidis have fled into the mountains and even into neighboring Syria to escape the extremist Islamic State group.

Britain for its part said its air force has already dropped water containers and solar lanterns over the Sinjar mountains where the Yazidis have taken refuge with little food and water.

An ancient religion with links to Zoroastrianism, the Yazidis have been given a choice of converting to Islam or dying, by the militants.