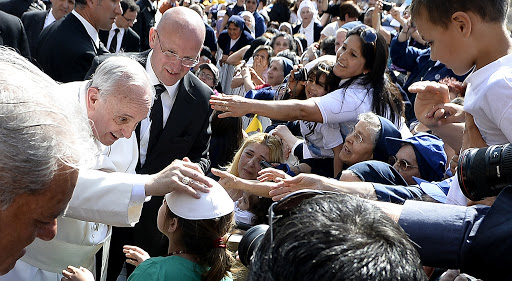 It’s time for a revolution in charity: instead of handouts, we must foster others’ flourishing.

Concern for the poor is at the heart of Christianity. Saint John Paul II called poverty one of the greatest moral challenges of our time, and to ignore the plight of the poor has consequences for our eternal souls.

“Almost without being aware of it, we end up being incapable of feeling compassion at the outcry of the poor, weeping for other people’s pain, and feeling a need to help them, as though all this were someone else’s responsibility and not our own. The culture of prosperity deadens us; we are thrilled if the market offers us something new to purchase. In the meantime all those lives stunted for lack of opportunity seem a mere spectacle; they fail to move us” (no. 54).

The consequence of apathy in the face of suffering is seen clearly in the parable of Lazarus and the rich man. In his commentary on this passage, St. Augustine notes that it was not his great wealth that sent the rich man to hell, it was his indifference. He just didn’t care. He ignored the poor man.

“Only in truth does charity shine forth, only in truth can charity be authentically lived. Truth is the light that gives meaning and value to charity. That light is both the light of reason and the light of faith. Without truth, charity degenerates into sentimentality” (no. 3).

Prudence is especially important when we try to help the poor. Saint Thomas Aquinas reminds us that justice can be destroyed in two ways: not only by “the violent act of the man who possesses power,” but also by the “false prudence of the sage.” Imprudent charity can actually increase injustice. Sometimes our help can actually make things worse.

There are many problems with the way we engage questions of poverty both in the U.S. and abroad, but one underlying philosophical issue that is often neglected is that we have replaced charity with humanitarianism. What is the difference? Humanitarianism focuses primarily on providing comfort and meeting the material needs of people, but this is only a small part of charity. Humanitarianism limits its horizons to the material, and thereby misses the creative capacity, inherent dignity, and eternal destiny of man.

Humanitarianism is a hollowed out secular and materialist vision of Christian love. It is a bad copy. Yet even Christian organizations often operate under a humanitarian model. As Pope Francis has warned, the Church is not supposed to be just one NGO (nongovernmental organization) among many.

Charity, on the other hand, comes from the word caritas in Latin or agape in Greek. Charity is Christian love.To love is to seek after the good of the other. That means that while good works and care for the poor are an essential part of charity, they are not the whole thing.

To desire the good of the other ultimately means promoting and encouraging human flourishing, all the while keeping the eternal destiny of the person in mind. Does this mean Christian charity does not care about material needs? Of course not, but it realizes this is not enough. The provision of material needs should be at the service of promoting human flourishing, helping the person to become all God has called him to be.