Religious Sister Dies From Ebola as Use of Drug Raises Concern 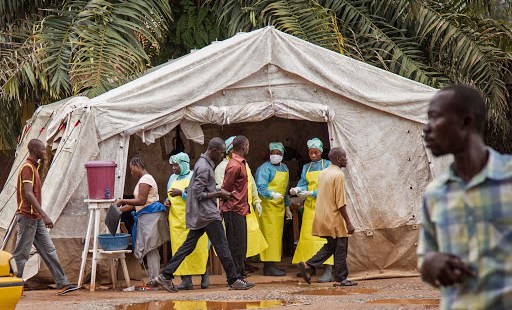 Is it fair to offer rare experimental medicine only to Europeans, some Africans ask.

A Congolese nun who had worked as a nurse in Liberia has died of Ebola.

The Hospitaller Order of St. John of God said in a statement sent to Fides news service that Sister Pascaline Chantal of the Immaculate Conception, who was in St. Joseph hospital in Monrovia, capital of Liberia, died Saturday morning.

There is also great concern regarding the health conditions of another religious, Sister Paciencia Melgar (from Guinea).

According to the note, a Spanish NGO that works side to side with the Hospitaller Order, is preparing a team of health professionals to be sent as soon as possible.

In a related development that raises a host of ethical issues, Spain announced it had obtained a scarce U.S.-made experimental Ebola drug to treat a Spanish missionary priest infected with the killer virus, AP reported.

So far the experimental drug ZMapp has been used to treat two infected Americans and a Spaniard but no Africans for a hemorrhagic disease that has been ravaging West Africa for months and has killed about 50 percent of those it infects. That news came as medical experts debated the ethical questions surrounding experimental Ebola drugs and vaccines during a teleconference Monday organized by the U.N. health agency.

There is no known cure or licensed treatment for Ebola, which has killed over 960 people in the current outbreak in West Africa. The World Health Organization has called the Ebola outbreak — which emerged in Guinea in March and has since spread to Liberia, Sierra Leone and possibly Nigeria — an international health emergency and urged nations worldwide to battle the disease.

The drug’s maker, Mapp Pharmaceutical Inc. of San Diego, says on its website that "very little of the drug is currently available" and that it is cooperating with government agencies to increase production as quickly as possible.

Nigerian officials say they had asked U.S. health authorities about getting the Ebola drug last week.

"It certainly looks bad that only three Westerners have gotten the drug while most of the people with Ebola are African," said Art Caplan, director of bioethics at NYU Langone Medical Center. He said the drugmaker must make its policy for distributing its treatment clear. "I don’t think this scarce resource should just be given to whoever is best connected."

Still, Caplan said there might be a reasonable explanation for why only Westerners were given the drug, including the need for a sophisticated medical center to administer it and monitor the patient carefully since the drug hasn’t been tested in humans.

But some Africans said giving the experimental drug only to Westerners was patently unfair.

"There’s no reason to try this medicine on sick white people and to ignore blacks," said Marcel Guilavogui, a pharmacist in Conakry, Guinea. "We understand that it’s a drug that’s being tested for the first time and that could have negative side effects. But we have to try it in blacks too."

In Nigeria, which says it has 10 confirmed cases of Ebola, some people began demanding the serum on Twitter. The World Health Organization has not yet confirmed the Nigerian cases.

In a statement, the Spanish Health Ministry said the ZMapp drug was obtained in Geneva this weekend with permission from the company and brought to Madrid to treat Miguel Pajares. The 75-year-old priest was evacuated from Liberia and placed in isolation Thursday at Madrid’s Carlos III Hospital.

Two Americans diagnosed with Ebola in Liberia and evacuated back to the United States have been treated with the drug. One of them, Dr. Kent Brantly, said last week that his condition was improving and the husband of the aid worker being treated with Brantly said the same thing.

The drug is made at Kentucky BioProcessing for Mapp Biopharmaceutical. A spokesman for Kentucky BioProcessing said last week that it complied with a request from the international relief group Samaritan’s Purse and Emory University Hospital in Atlanta and provided a limited amount of the drug. Brantly works for Samaritan’s Purse and both Americans are being cared for now at Emory.

It was not exactly clear how Spain got the drug and authorities refused to comment about any possible costs involved. Geneva University Hospital told The Associated Press it was involved in getting the drug to Spain but would not elaborate.

In its statement, Spain’s Health Ministry said "the medicine was imported from Geneva where there was one dose available in the context of an accord between the laboratory that developed the medicine, WHO and (Doctors Without Borders)."

It said Spain sought the drug under a Spanish law that permits the use of unauthorized medication for patients with a life-threatening illness who cannot be treated satisfactorily by authorized drugs.

At least two countries in West Africa have expressed interest in the drug. Nigeria’s health minister, Onyenbuchi Chukwu, said last week he had asked U.S. health officials about access to it but was told the manufacturer would have to agree. Guinea also said Monday it would like to have some of the drug.

"Guinean authorities would naturally be interested in having this medicine," said Alhoussein Makanera Kake, spokesman for the government committee fighting Ebola.

Because the ZMapp drug has never been tested in humans, scientists say there’s no way to tell if it has made any difference to the two American aid workers who have received it.

The drug is a mixture of three antibodies engineered to recognize Ebola and bind to infected cells so the immune system can kill them. Scientists culled antibodies from laboratory mice and ZMapp’s maker now grows the antibodies in tobacco plants and then purifies them. It takes several months to even produce a modest amount of the drug.

The U.N. health agency planned to hold a news conference Tuesday to discuss the ethics meeting.