EWTN to Have Studio in Televangelist’s Former Crystal Cathedral 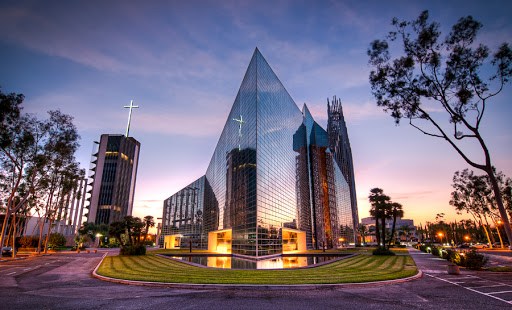 A West Coast newsroom to take up occupancy in an iconic structure.

The Eternal Word Television Network has shown phenomenal growth in the three decades since Mother Angelica set up a makeshift studio on the outskirts of Birmingham, Ala. The network broadcasts over the airwaves (including radio) in more than 140 countries, publishes a newspaper, and covers every major Vatican event and many diocesan events around the country as well.

Now, it is building a newsroom on the West Coast. And it’s on grounds that are familiar to television viewers.

"The Church is alive and growing in Southern California, and the diversity there is important to us," EWTN Chief Executive Michael Warsaw told the Wall Street Journal, adding that the location will help create programming for its Spanish-language stations.

The new studio, fittingly enough, is on the campus of the former Crystal Cathedral, which was the base for Protestant televangelist Rev. Robert H. Schuller. Schuller broadcast his Gospel message from the soaring glass sanctuary until his ministry went bankrupt. The Diocese of Orange, Calif., in 2011 bought the structure he built, renaming it Christ Cathedral. It is currently undergoing renovation.

EWTN’s plans coincides with the growth of Catholicism in the western U.S. The number of Catholics in Orange County, for example, surged to 1.3 million in 2014 from 595,101 in 1996, according to the Official Catholic Directory.

The network, which said in a press release that it
hopes to begin using the studio to transmit news, televised Masses, and "inspiring stories of faith" by the end of the year
, had considered other western locations, but Schuller’s legacy—a church with dramatic indoor and outdoor spaces—"absolutely helped make this the right fit for us," Warsaw told the Journal. It helped, too, that Schuller gave his blessing for such a collaboration when they met last year at a Catholic conference, the newspaper added.

Carol Schuller Milner, the televangelist’s daughter, said her father supports the efforts. "He felt the Catholic Church would take good care of the grounds," she said. according to the Journal. "He wanted it to be full of life and hope again."