The Debate over “Common Core” 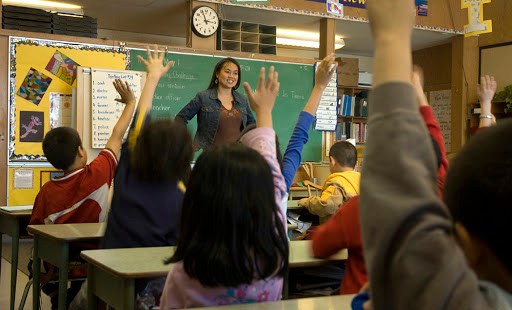 Longer ago than I care to remember, I spent three years working for a Washington-based national education organization. I liked the people, enjoyed my job, and had the pleasant feeling that I was contributing to a worthwhile cause.

I also learned a couple of things. One was that professional educators love innovation, or at least the idea. Another was that there’s a vast education machine—not only schools and teachers but administrative bureaucracies, groups like the one I worked for, unions,  producers of textbooks and other materials, university faculties, foundations, think tanks—for whom innovation is almost literally their bread and butter.

Since that now distant era, the education machine has continued to busy itself with devising and implementing innovations—new ways of teaching this or that, new standardized tests, new technology—all said to hold the key to revolutionary change for the better. Alas, reality often falls short of expectation, and the performance of large numbers of students in American public schools has remained cause for concern.

Parenthetically, one might note that a providential lack of resources has generally spared Catholic schools much of this foolishness.  Nevertheless the church schools have suffered a comparable problem of their own—the long reign, now mercifully ending, of catechetical theorists with a liberal agenda who seized the upper hand in religious education after Vatican II.

In any event, American education now has the Common Core and the controversy surrounding it. Product of multi-million-dollar funding by the Bill and Melinda Gates Foundation and the diligent churning of the education machine, the Common Core consists of standards spelling out what kids should have learned at various stages in their schooling.

Forty-six states to date have bought in. Alaska, Nebraska, Texas, and Virginia said no thanks, while several of the original 46 have backed out and a couple of others are weighing that. The alleged evils of the Common Core have predictably become a cause célèbre for some conservatives.

I have no strong feelings either way. On the one hand, it’s not unreasonable to want realistic uniform standards for student achievement. On the other hand, neither is it unreasonable to worry about ideology-crazed innovators of the future imposing their wills on American schools in this way. Let the Common Core debate proceed.

As things stand, my reservations go beyond Common Core itself. Like educational innovations of the past, its focus is on what happens—or doesn’t happen but should—in the classroom. This implies that the classroom experience determines what kids learn. But although to a great extent it does, equally or arguably even more important are the things that happen, or fail to happen, in homes, neighborhoods, and the culture at large.

Why is it that the academic performance of American students so often is so poor? While the culture of poverty is frequently blamed, the culture of self-indulgent affluence is hardly less at fault. Causal factors include parents who don’t read to their kids, homes with several TVs and heaps of electronic gear but hardly any books, a youth culture that encourages frittering away time via social media and values quick-fix gratification at the expense serious intellectual work, and the emotional fallout from the breakup of marriages and homes.

The list could be extended, but the point should be clear: the problem isn’t  just the classroom but the culture at large.

Would the education machine care to tackle that one? Would the Gates people  like to pour multi-millions into the project? Now that would really be an innovation.