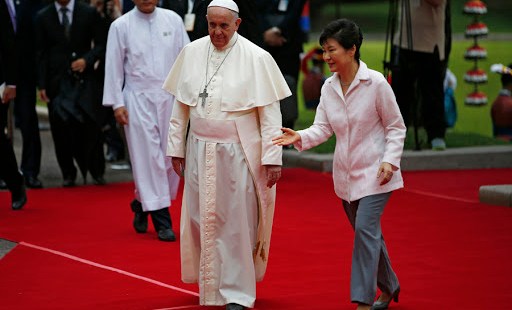 “Peace not simply the absence of war, but ‘the work of justice,’” Francis says.

In his first public address after arriving in South Korea, Pope Francis called on government officials to work for an authentic and far-reaching peace, which requires forgiveness and cooperation.

“Peace is not simply the absence of war, but ‘the work of justice,’” the Pope said Aug. 14, alluding to the words of the prophet Isaiah.

“And justice, as a virtue, calls for the discipline of forbearance; it demands that we not forget past injustices but overcome them through forgiveness, tolerance and cooperation,” he continued. “It demands the willingness to discern and attain mutually beneficial goals, building foundations of mutual respect, understanding and reconciliation.”

And yet, even as he was calling for a halt to "fruitless" shows of force, Seoul’s rival, North Korea, fired five projectiles into the sea, the Associated Press reported. North Korea has a long history of making sure it is not forgotten during high-profile events in the South, and Thursday’s apparent test firing off its eastern coast made its presence felt.

North Korea’s apparent test firing was conducted from Wonsan on its east coast and the initial three short-range projectiles flew about 135 miles, according to a South Korean Defense Ministry official who spoke on condition of anonymity, citing office rules. It wasn’t immediately clear what the projectiles were. After an initial three firings an hour before Francis arrived, North Korea followed up with two others a short time after he landed.

North Korea has conducted an unusually large number of short-range missile and artillery test firings this year. It has expressed anger over annual military drills between the United States and South Korea, which it says are invasion preparations. A new round of drills, which Seoul and Washington call routine and defensive, is expected to start in coming days.

Neither Francis nor South Korean president Park Geun-hye referred to the firings in their public remarks.

After an initial private Mass and a welcoming ceremony, the Pope met at the “Blue House” in Seoul with Park and government and civil authorities, as well as members of the diplomatic corps. He thanked those present for their warm welcome and expressed his joy in coming to Korea, with its natural beauty, as well as the beauty of its people, culture and history.

“This national legacy has been tested through the years by violence, persecution and war,” he lamented. “But despite these trials, the heat of the day and the dark of the night have always given way to the morning calm, that is, to an undiminished hope for justice, peace and unity.”

In the first speech of his first trip to Asia, Francis urgd the people of Korea not to become discouraged “in our pursuit of these goals which are for the good not only of the Korean people, but of the entire region and the whole world.”

The Argentine Pope usually speaks in Italian or his native Spanish, but the Vatican said he would deliver at least four speeches in English on the trip to accommodate his Asian audiences. They are the first English speeches of his pontificate.

Pope Francis drew a connection between two events that will occur during his five-day visit to the country: the beatification of 124 Korean martyrs and the celebration of the Sixth Asian Youth Day, uniting Catholics across the continent.

The martyrs are the elders of our faith, who teach us by their example how to live, he said. The young are those who receive the legacy of the past, with its ancestral wisdom, and “apply it to the challenges of the present.”

The Asian Youth Day is an opportunity to reflect on the hopes, concerns and transmission of values to the next generation, Francis said, adding that “it is especially important for us to reflect on the need to give our young people the gift of peace.”

Recognizing that this message is particularly significant in Korea given its lack of peace, he voiced appreciation and encouragement for reconciliation efforts underway on the peninsula, saying that they “are the only sure path to lasting peace.”

“Korea’s quest for peace is a cause close to our hearts, for it affects the stability of the entire area and indeed of our whole war-weary world,” he said.