The Emptiness of Korea’s Youth That Francis Can Help Fill 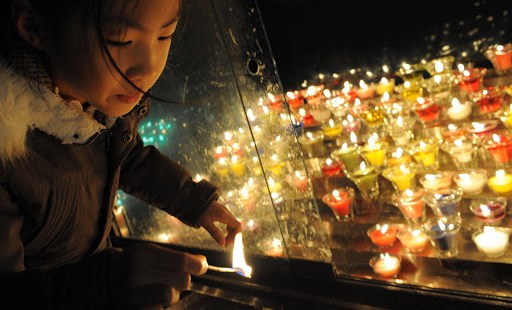 AFP PHOTO / Sam YEH
REPUBLIC OF KOREA, SEOUL : A South Korean girl lights candles at Myeongdong Catholic Cathedral in Seoul on December 24, 2011. Christmas is one of the biggest holidays celebrated in South Korea with Christians forming over half the population. AFP PHOTO / Sam YEH
Share
Print
Misna - published on 08/14/14

“Koreans have very generous souls,” says missionary priest. “Many will give concrete responses” to Pope.

On his visit in South Korea, Pope Francis will join thousands of young people from Korea and other nations to mark the Asian Youth Day. MISNA asked Father Diego Cazzolato, who has been in Korea for 26 years and will be among the youth in Daejeon, to speak about the world of Korean youth.

We have written in the past days that the development and modernization of Korea hasn’t stopped the growth of Christianity and religiousness in general. Is this description still correct today for the young?

It is true that the Christian community is growing, though especially for the participation of adults and elderly. Also here, young people are in a period of crisis, with always less participation and presence.

What images would you use to describe some typical characteristics of Korea’s youths?

In my view, Korea’s young people are stuck in a vice. On one hand by the weight of traditions, a still very strong Confucian culture in which authority and order remain important, and on the other the influx, given to the economic boom, the west and travel, individualism, the search for wellbeing and privatization of commitments and personal realization. For many, balancing personal and social growth and individualism isn’t easy in this vice.

In this difficult search for personal and social balance, what does the Christian community have to offer young people?

It is important to remember the Legion of Mary, introduced in this nation by the French missionaries. This movement was able to accentuate an identity of Confucian culture, in which we, the society, the state and parish community remain a priority. Many youths here are committed to local, national and international volunteer work, not strictly tied to the Church or religions.

Do you feel that the participation of Pope Francis in the Asian Youth Day will have an important impact on the lives of many young people?

Undoubtedly it will be an important source of courage. The Korean deacon who lives here with me says that Korean youths were “robbed of their ability to dream.” The social pressure to compete for a good job and well-being is so strong that many youths end up frustrated, alone and depressed, often incapable of handling themselves. The difficulties, lack of success and in some cases guilt of not living up to the sacrifices of their parents, causes an immense sense of fragility. Also for this reason Korea has a high suicide rate.

In the face of such a difficult and trying situation for youths, is the Christian community giving or seeking concrete responses?

Even many priests don’t know what to do in light of this situation. Some try to be close to these youths in their struggles, but it is not easy because school and other activities take up all their time, reducing the possibility of participation or presence in the parish community.”

Have the new means of communication and online interaction, like in other Asian nations, become a strong trend also in Korea, particularly among youths?

Almost all parishes have an internet site with a space for youths to interact and many priests try to maintain contacts with young people through Facebook, Twitter or other social networks. These means are however not enough to reach their hearts. Many youths in fact grow up too lonely.

What may Pope Francis tell these young people?

The theme of Asian Youth Day is "Asian Youth! Wake up! The glory of the martyrs shines on you." This is an invitation for young people to return with courage to a life of faith, also helping the weaker, the poor, strangers and marginalized. Koreans, no matter their religion, generally have very generous souls. Generous with money, their time and in volunteering. Many of them will give concrete responses.