The Pope’s English, a Korean Car and a Mea Culpa 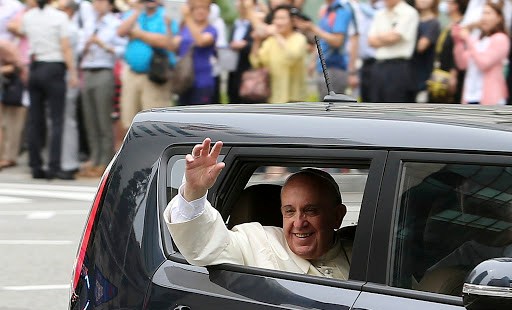 Francis makes a splash in Korea on his first visit to Asia.

Pope Francis has arrived in Korea, to begin a five-day pastoral visit, the highlights of which include the beatification of 124 Korean martyrs and the celebration of the 6th Asian Youth Day.

Vatican Radio’s Sean-Patrick Lovett reports from Seoul that the Holy Father’s visit is dominating the headlines and capturing the attention of the entire nation.

He also had a perspective on the Pope’s first speeches in English.

"Many of the English-speaking journalists here at the Press Center in Seoul were so excited about hearing Pope Francis pronounce his first speech in Korea in their language, they almost forgot to listen to what he said," Lovett said in a broadcast. "Nearly all of them awarded him top marks for pronunciation, modulation and tone—which they felt more than befitted the occasion."

The occasion was the first public event on the Pope’s Korean schedule: his meeting with the nation’s authorities, members of government, the diplomatic corps, and President Park Geun-hye.

The Korean president’s address centred largely on describing the different events that will involve the Holy Father during this apostolic visit – from the celebration of Asian Youth Day to the beatification of the 124 martyrs. Referring to the final Mass for peace and reconciliation scheduled to be celebrated in Myeong-dong Cathedral on the final day of the trip, she spoke of the Korean War (waged between 1950 and 1953) as a gash in the nation’s history and a wound that has lacerated Korean families as well.

Pope Francis also referred to the fact that Korea is a land that “has long suffered a lack of peace." He expressed his appreciation for all efforts made towards fostering a spirit of reconciliation on the Korean peninsula, “for it inspires stability," he said, “in the entire area and of our whole war-weary world." (By the way, it was that tongue-twister that won him the unashamedly appreciative applause of the English-language press following the speech).

The Pope warmly encouraged “the formation of new generations of citizens ready to bring the wisdom and vision inherited from their forebears and born of their faith to the great political and social questions facing the nation."

He reiterated the Korean Catholic community’s commitment to participating fully in the life of the country, by reminding those present that “the Church wishes to contribute to the education of the young, and the growth of a spirit of solidarity with the poor and disadvantaged."

But his final words were for the elderly and the young people: “By preserving memory and inspiring courage," he said, “they are our greatest treasure and our hope for the future."

Pope Francis is top story in all the nation’s papers and news shows. Pictures of his smiling face continue to flash across screens and fill the front pages of the principal South Korean tabloids.

One story in particular that is raising curiosity is his choice of vehicle for getting from place to place. South Korean media widely reported that the Pope requested the smallest South Korean car during his visit, noted the Associated Press. He got Kia’s second-smallest model, apparently because it provides more leg room than other compact cars.

The name of the model? The Soul.

"Francis’ frugality and humble demeanor have received wide coverage in South Korea, a fiercely competitive country that celebrates ostentatious displays of status and wealth," wrote AP." After the conclusion of arrival ceremonies at the airport, the Pope "climbed into the backseat of the boxy Kia Soul, rolled down the window and waved. Surrounded by a few bigger black sedans, the Pope’s compact car headed toward Seoul."

Many South Koreans would consider too humble a conveyance for a globally powerful figure, said the wire service.