Walking the Lonely Road of Salvation 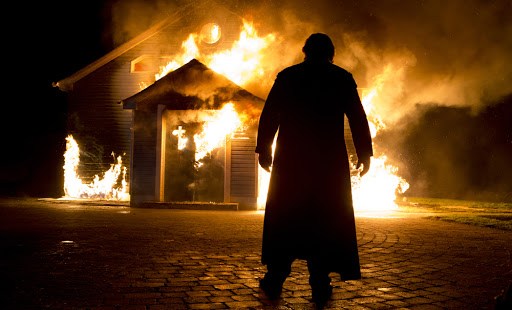 Paying for the sins of the fathers in John Michael McDonagh’s “Calvary.”

There’s basically  two ways for a person to feel after viewing writer/director John Michael McDonagh’s new film, “Calvary.” The first is that the world is an ugly place full of desperate, despicable people and, due to the child sex abuse scandals, the Church has lost much of its credibility when it comes to providing a way to help them. The second is pretty much the same as the first, except that there’s still some hope left. Really, it comes down to how you choose to interpret the final scene of the film.

In contrast, the opening of the movie is unambiguous and deceptively simple in how it sets up its premise. It begins with Father James (Brendan Gleeson) sitting in a confessional when a supposed penitent enters and states his intentions to murder the priest in a week’s time.

The man on the other side of the screen explains to Father James that as a child he was continuously molested by a member of the clergy over a five year period and now wishes to make a statement by killing an innocent priest. He closes by telling Father James the time and location they should meet to carry out the execution.

Although Father James claims to have recognized the man’s voice, and his bishop assures him that the seal of confession does not apply (no absolution was sought or given), the priest decides not to inform the police. Rather, he chooses to remain in the small Irish town that constitutes his parish and attend to his regular duties. His unstated reasons for doing so are yet another thing left for the audience to decide.

The bulk of the film follows Father James as he spends the week interacting with his somewhat estranged daughter (he joined the priesthood after becoming a widower) and the various townsfolk who make up his congregation. His daughter, Fiona (Kelly Reilly), is recovering from a suicide attempt following a failed relationship, and still holds some resentment against James for entering the priesthood so soon after his wife’s death. Despite her emotional turmoil, however, Fiona has traveled from London in order to try and reconcile with her father.

Everyone else in town, on the other hand, appears to have little use for the priest, at least on the surface. The richest man in the area shows him an apathetic indifference. The local butcher openly ridicules him. The butcher’s adulterous wife laughs at his advice while simultaneously flirting with him. Both the wife’s lover and the Buddhist pub owner show him unconcealed contempt. The corrupt law officer flaunts his homosexual prostitute before him. The aggressively atheist doctor continuously tries to shake his faith. Everyone, it seems, has lost all faith in the Church, and takes out their disillusionment on Father James.

If "Calvary" comes close to having a glaring fault, it’s that the entire population of the small village in which James resides, even the loutish priest with whom he shares a rectory, is so unrelentingly vile that they come near the point of cartoonishness. Seriously, if the real Ireland was anything like this place, one gets the impression we would all be better off if the whole country simply sank into the ocean.

Fortunately, there are two things which save the film from going too far with its depictions of James’ parishioners. One is that the actors manage to convey a feeling that, despite their hostility, their characters really want the priest to be there doing what he is doing. They’ve given up, but they don’t want him to. Even when the town doctor relates a particularly horrible experience he had early in his career involving a paralyzed child, an event which clearly contributed to the physician’s atheism, there is the lingering sense that he really desires for the priest to provide an answer.