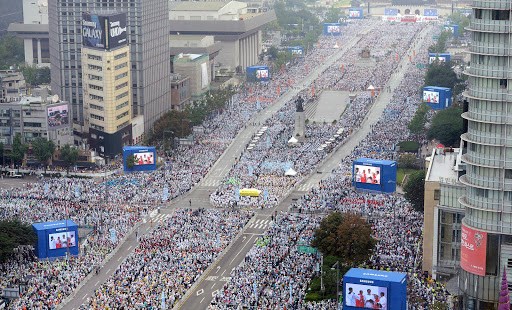 Pope Francis celebrated Mass for the Beatification of the Korean Martyrs pointing to their example that, he said, has much to say to societies today where alongside immense wealth, dire poverty is silently growing and where the cry of the poor is seldom heeded.

On the third day of his apostolic visit to the Republic of Korea, the Pope celebrated the faith of Paul Yun Ji-chung and his 123 companions "who lived and died for Christ, and now reign with Him in joy and in glory." He said the victory of the martyrs and their witness continues to bear fruit today in Korea.

In a world in which our faith is often challenged, the Pope said the example of the martyrs calls us to put Christ first, it teaches us the importance of charity and love of neighbor.

The streets leading up to Seoul’s iconic Gwanghwamun Gate were packed for the Mass. The Vatican said about 800,000 people were in attendance—an extraordinary number for a country where Catholics represent only about ten percent of the population of 50 million.

En route to the altar before Mass, Francis stopped his open-topped car so he could get out and bless a group of families who lost loved ones in the sinking of the Sewol ferry in April, in which more than 300 people, most of them high school students, were killed. On his white cassock, Francis wore a yellow ribbon given to him by the families a day earlier when he met with them privately to try to console them.

"We want the truth," read a yellow banner, a reference to the families’ demands for an independent inquiry into the sinking. Officials said 400 families had been invited to the Mass.

The process for the beatification and canonization of other Korean martyrs, including Father Thomas Choe Yang-eop and Bishop Francisco Borgia Hong Yong-ho, is currently underway.

Here is the full text of the Pope’s homily at the Mass for the Beatification of the Korean Martyrs:

Who shall separate us from the love of Christ? (Rom 8:35).  With these words, Saint Paul speaks of the glory of our faith in Jesus: not only has Christ risen from the dead and ascended to heaven, but he has united us to himself and he grants us a share in his eternal life.  Christ is victorious and his victory is ours!

Today we celebrate this victory in Paul Yun Ji-chung and his 123 companions.  Their names now stand alongside those of the holy martyrs Andrew Kim Taegon, Paul Chong Hasang and companions, to whom I just paid homage.  All of them lived and died for Christ, and now they reign with him in joy and in glory.  With Saint Paul, they tell us that, in the death and resurrection of his Son, God has granted us the greatest victory of all.  For “neither death, nor life, nor angels, nor principalities, nor things present, nor things to come, nor powers, nor height, nor depth, nor anything else in all creation, will be able to separate us from the love of God in Christ Jesus our Lord” (Rom 8:38-39).

The victory of the martyrs, their witness to the power of God’s love, continues to bear fruit today in Korea, in the Church which received growth from their sacrifice.  Our celebration of Blessed Paul and Companions provides us with the opportunity to return to the first moments, the infancy as it were, of the Church in Korea.  It invites you, the Catholics of Korea, to remember the great things which God has wrought in this land and to treasure the legacy of faith and charity entrusted to you by your forebears.