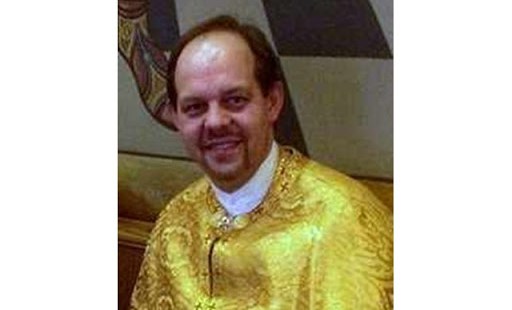 Born in Poland, Bodhan Danylo will be youngest bishop in America.

The phone call caught Father Bohdan Danylo by surprise when he was named by Pope Francis as the new bishop of the Eparchy of St. Josaphat in Parma, Ohio, August 7.

“I got the phone call, and the rest was history. I hope that I will be able to fulfill this new task that the Holy Father is asking of me,”  said Bishop-elect Danylo, rector/rresident of St. Basil Ukrainian Catholic Seminary in Stamford, CT.

The Eparchy of St. Josaphat is one of four Ukrainian Catholic dioceses in the US, which has parishes from Ohio to as far south as Florida. Born in Poland, Bishop-elect Danylo has a connection to the Eparchy of Parma through his paternal grandfather, John Danylo, who was born in Pittsburgh and left America for Eastern Europe before outset of World War I. The eparchy covers Ohio, Western Pennsylvania and five other states.

Bishop-elect Danylo outlined the priorities of his episcopal ministry of the eparchy in two steps: to preach the Good News of Jesus Christ and to bring the Lord close to the people of God.

The bishop-elect is hopeful for even more growth within the Ukrainian Church in the US, which he said requires that we stop considering the Church as a building, but as a community of people, willed by God, where we meet the living Christ.

At 43 years old, Bishop-elect Danylo will become the youngest bishop in the US and take possession of the longest vacant see in the country. When asked about how he feels about his age, he quoted Cardinal Lubomyr Husar, former head of the Ukrainian Catholic Church, on the election at age 40 of Major Archbishop Sviatoslav Shevchuk, the Church’s current leader: “Do not worry; the time of each day will be working against him.” The bishop-elect hopes to grow in wisdom day by day to be able to fulfill the duties of his ministry.

Bishop-elect Danylo was born in1971 in Gizycko, Poland. He entered seminary formation at the Metropolitan Seminary in Lublin, and studied philosophy at the John Paul II Catholic University of Lublin. In 1992, he immigrated with his family to the US  where he continued his theological studies at the Catholic University of America. In 1996, he earned a Bachelor’s degree in Sacred Theology and was ordained a priest for the Ukrainian Catholic Eparchy of Stamford, Conn., that year. Later, he earned a Licentiate in Sacred Theology at the Pontifical University of St. Thomas Aquinas in Rome.