The Irish Abbey that Refused to Die 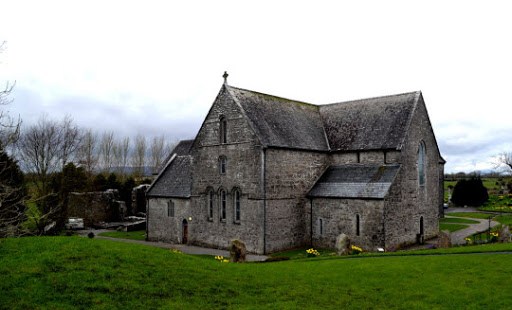 Mass has been celebrated at Ballintubber Abbey every day for 800 years.

"Ballintubber"– As with all things Irish, there is a mystery captured in the name.

In the west of Ireland, nestled amidst County Mayo’s rolling green hills, sits ancient Ballintubber Abbey. Its name comes from the Gaelic, "Baile an Tobair Phadraig" or "village of St. Patrick’s Well."

St. Patrick is said to have established the church at Ballintubber and baptized Christian converts at St. Patrick’s Well; a stone here bears the impression of his knee. The Abbey is the starting point of St. Patrick’s ancient pilgrimage route called Tóchar Phádraig (“St. Patrick’s Causeway”).

The path that begins in the Abbey graveyard ends twenty-two miles away at Croagh Patrick, Ireland’s famous conical Holy Mountain.

How a Prince in Exile Vowed to Build the Abbey

Ballintubber Abbey has the distinction of being the only Abbey founded by an Irish king where Mass has been said without interruption since the early 13th century when it was built by Cathal Crovderg O’Connor, king of Connaught.

And therein lies an Irish tale: before Prince Cathal ascended to the throne, his father King Turloch was fleeing from his enraged Queen, Cathal’s stepmother. Cathal obtained shelter and work from a local man named Sheridan, who treated him kindly. The young prince vowed to return the kindness shown him; he returned years later as King and asked Sheridan what favor he could do for him. The old man asked only that Cathal restore their deteriorating church; Cathal promised him a new church instead.

A couple of years passed and King Cathal asked Sheridan how his new church pleased him. He was shocked when he was chastised for not keeping his promise to build a new church. Cathal insisted that he had indeed ordered the building of a new church. On further inquiry, he learned that a church had indeed been built, but in Baile tobair Bhrighde, Roscommon, and not in Baile tobair Phadraig, Mayo.

King Cathal therefore vowed to build another church “seven times more magnificent” in Ballintubber, Mayo, and this is the Abbey that stands there today.

The Abbey is Attacked by Protestant Forces

The Abbey lived peacefully for 250 years until 1536, when a law that called for the dissolution of monasteries was passed in English-dominated Dublin. Theoretically, Balintubber’s Abbot was bound to follow the orders of King Henry VIII to close the Abbey, but it was not easy to enforce the law in such distant regions.

Amazingly, the monks continued to occupy the Abbey for another 65 years until the reign of James I of England and Ireland, who confiscated Abbey lands in 1603 – and dispersed the monks.

However, this was not to be the end of the Abbey’s story. Between 1603 and 1654, a mendicant order of Augustinian Friars is believed to have taken over the Abbey. They only finally left after three days of burning and pillage committed in 1653 by the Puritan Oliver Cromwell’s soldiers.

The Cromwellian assault was devastating, destroying the monastic buildings, cloisters, dormitories, and quarters. The wooden roof was burned, but the internal stone-vaulted roof of the chancel, the side chapels, and the sacristy remained. Complete destruction was kept at bay, and incredibly, Mass continued to be said at the Abbey.

Thus began the Abbey’s long years of secrecy and terror. For centuries, even through the Penal Years – when Catholicism was outlawed and priests were hunted – Mass continued to be celebrated  at the devastated Abbey and attended by the loyal townsfolk.

This was often a very perilous thing to do. Paid informers were a constant danger.

For 236 years, the local people were forced to hear Mass in the roofless Abbey church, completely open to the elements. A photograph from 1865 is witness to this, showing people kneeling on the grassy ground. Though the Mass has ended, they continue kneeling as the priest gives instruction to the children.